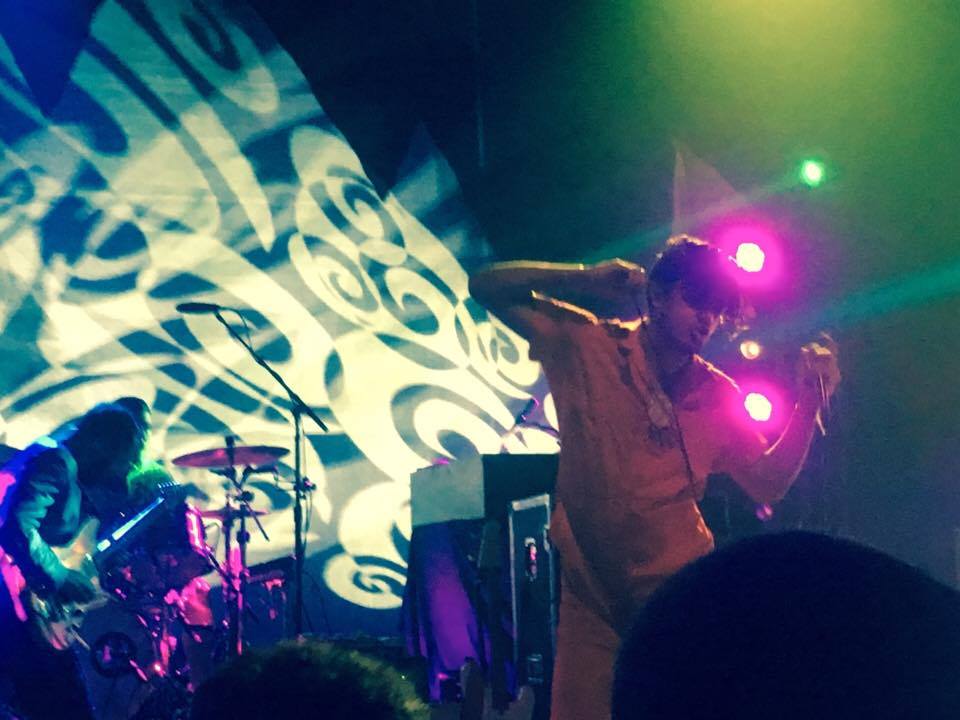 While the sun was setting, the line extended around the building’s corner. A white van slowly drove past the people in the front of the queue. Suddenly, gasps and a shout erupted: “Oh my god! I saw Sameer! The band’s in the van!” People started to whisper amongst themselves, wrapping their minds around the fact that Young the Giant was actually in Dallas, just barely out of reach. Mouths began to sing some lyrics of “Apartment,” a staple concert song from the first first album. The excitement was rising in everyone’s guts, a feeling that clearly couldn’t be restricted. All that was left for the fans to do was wait.

Ra Ra Riot started the show with a bright spotlight. Automatically, the crowd could feel the bass rumble through, vibrating the phlegm in their throats. The few people who knew the band would agree that the live sound was considerably better than listening to the album with headphones. The band’s presence appeared professionally fun, showcasing the amount of years they spent in the industry. Eyes scanned the stage, dazzled by the violinist’s glittery violin and her literally windswept blonde hair, blowing beautifully by a perfectly placed invisible fan. Ra Ra Riot’s performance was mainly due to the very groovy bass and the unfaltering voice, causing hands to raise and wave to the beat. When Young the Giant took the stage, people screamed like 60s fangirls as the lights suddenly flashed on to the song “I Got.” The backdrop was gorgeous: three white mountains with swirly lights illuminating in wonder. The visuals fit with every song. The slow songs like “Titus Was Born” and “Firelight” had little twinkling stars against the mountains turned black, mesmerizing the crowd as vocalist Sameer Gadhia’s voice honeyed through South Side. In the more upbeat tracks such as “Home of the Strange” and “Amerika,” colorful flags blew proudly in the corners of the stage while a rainbow flurry spun the room around. The visuals united the venue together, jaws dropping in awe.

Drummer Francois Comtois played every song with feeling. His musicianship in percussions were very unique while still staying classic. A characteristic that definitely differentiates Comtois with other drummers is the inexplicable way how emotion could be evoked with simple bass and cymbals. Guitarist Eric Cannata grinned and grooved at the crowd, making the room go wild with his ripping solo at the end of “Eros.” Guitarist Jacob Tilley’s crunchy gain soared through the whole floor, contrasting his maintained mellow demeanor. Bassist Payam Doostzadeh travelled across the stage, bopping across the stage and using the language of bass to talk to fellow band comrades. Young the Giant is known for their amazing energy. Throughout the whole show, Gadhia danced, twisted, and jumped all over the stage, grabbing every fan’s heart in the process. His voice was as varied as his moves, moving in between three microphones: a classic mic, a wavy mic, and even a precious toy megaphone that he shouted into. Gadhia’s vocal exemplary vocal skills were even more appreciated with his crowd interactions, touching the front row’s hands and giving intense eye contact. Every person in the room swore he looked at them.

Overall, the night left the crowd with their tongues sticking out in tribute to “Silvertongue.” Fans left the venue doused in silver light (or just spilled beer), reflecting all the colors of the rainbow. Young the Giant always one-up their last performances by a long shot, leaving Dallas beyond impressed, satisfied, and hungry for more.