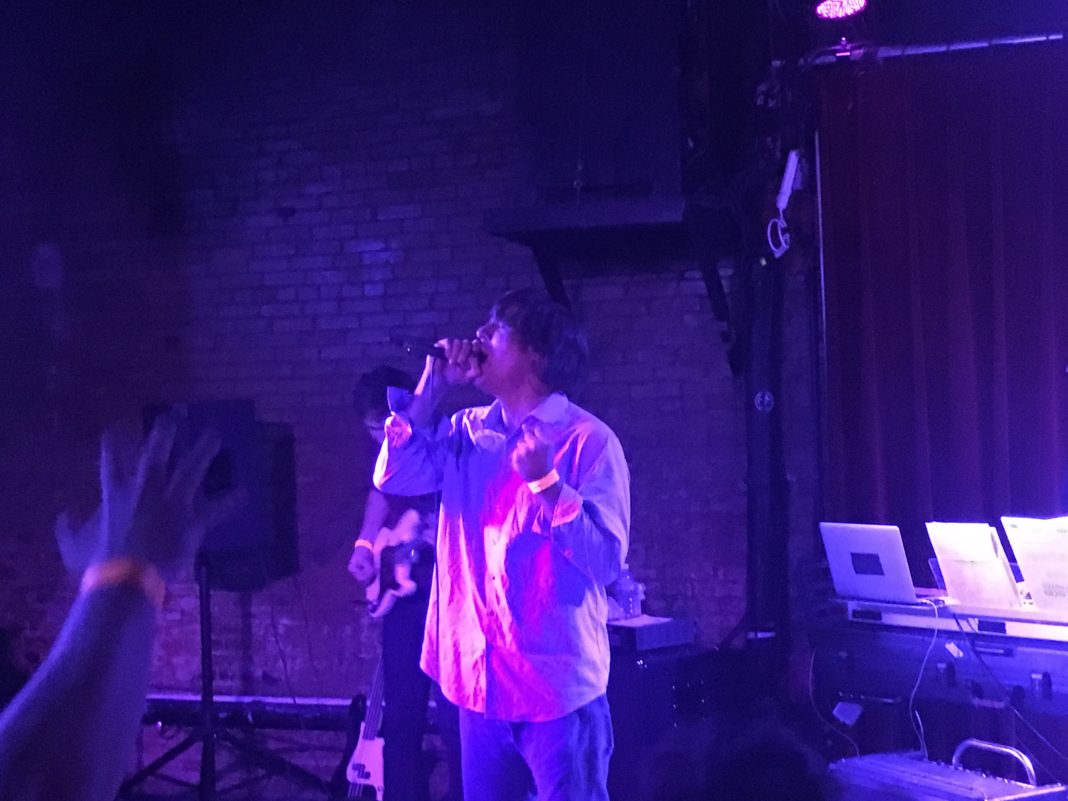 John Maus is quite the elusive character. Spending the past couple of years off the radar with only the appearance on an Adult Swim show to hold us over, John Maus finally began touring again with the release of his album Screen Memories that came out last year. His stop in Dallas was at Club Dada for a sold out show that packed the house. One thing I noticed right off of the bat is that not many people went out of the crowd after the opening (first time I’ve seen that happen at Dada), which gave me my first hint that the crowd would be rather invested in the show to come.

Greeted with a respectable roar from the crowd upon entry, John Maus and co. quietly entered the stage and started the show off with “Castles in the Grave,” instantly loosening the crowd up and getting them ready for a night of yelling and beautiful synth lines. The set had a rather energetic start featuring songs like “Rights for Gays,” “Maniac,” and “Pure Rockets.” One thing that struck me immediately was that the newer songs seemed to follow through with the synths quite a bit more than the older ones. I don’t think this was intentional as I saw the keyboard player frantically gesturing to turn the synths up. If you have heard anything about John Maus live performances, you probably heard that he is bustling with quite a bit more energy than his albums may suggest. After all, until the album of rarities came out, the only recorded example of John Maus screaming on a main album showed up on “Too Much Money” (which sadly wasn’t played live here). On stage, John Maus was teeming with energy to the point where he could just blow up on stage (and did through his vocal performance). There were many moments where he was headbanging at full force, and there were even points of time where he slammed the mic into his head. Consequently, he had to recover for a moment in between songs due to his energy output. This output of energy however was executed super well as most of the crowd followed up by chanting the lyrics with him, keeping up with yells, and kept a constant pit going for the majority of the set.

Speaking of the crowd, I wanted to take a moment to appreciate the crowd for John Maus. A few months earlier at the Ariel Pink show, one of my major grievances with the crowd was that most of them only knew the songs from Before Today onwards, essentially leaving a good 2/3rds of his music (a.k.a the ones that are more fun live) unknown to a good chunk of his crowd. After witnessing that, one of my biggest fears was that some of the songs from Love Is Real, or Songs would be met with a rather cold response from the crowd. Thankfully, Dallas came prepared, and surprised me by being even more interested in the older works than new. From my perspective (toward the front of the crowd), everyone (save a few who looked like they didn’t quite know who John Maus was) was having a fun time, and created a good environment from the crowd. For that, thanks to the Dallas John Maus fans who probably made the best crowd experience I’ve ever had at a show. Back to the music, John Maus hit us with song after song which drained our energy. I remember thinking the whole time that the setlist was always surprising me, while providing a great lineup of music. If I had to take a guess, I would imagine that the crowd’s energy peaked at “Cop Killer” (no surprises there), yet held around that level of energy for quite a while before and after. Towards the end, Maus played songs that were much more personal to him, including “Bennington,” and “And Heaven Turned to Her Weeping” which may have been the last slow song I would have ever expected, but the one I knew my heart wanted the most. If I hadn’t been spending the past ten songs give or take jumping around like a madman, tears would have been rolling down my cheek with no end in sight at that point. After taking a leave for a brief moment (not quite sure if it was suggesting an encore, or if John Maus needed a moment away from everything), the set ended with ”Believer”. While “Believer” is a magnificent song to end the whole set with, it didn’t really help that the synths weren’t blowing my god damn eardrums out during it.

John Maus is an artist that I’ve seriously been invested in since the first time I heard Love is Real in high school, and after a magnificent set at Club Dada, it felt like a certain part of me was completed once the set had come to an end. While it may be awhile before we see John Maus tour again, this is one that I can imagine will resonate with the crowd for a good time to come.