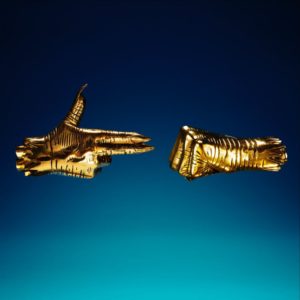 Notorious Bernie bro, Killer Mike, and his partner in rhymes, El-P, are back. The duo known as Run The Jewels, have returned with their third LP, a call to arms, Run The Jewels 3 (RTJ3). The duo have spent the better part of their last two LPs talking about the flaws in the system, corruption, the plight of PoCs in America, but this new LP take a slightly different approach to their iconic style. The rap duo is mad and is tired of standing around, they are ready to tear down the system they have been trying to dismantle for the last few years, and RTJ3 has Killer Mike and El-P at their best since their debut.

Some of the most visceral, energetic music from anybody in the game has come from Run the Jewels in recent times. However, this third installment is turned down a notch. The raw hot takes that fans know and love are still there on slowed tempo, but not much, all in attempt to aid in the heaviness of the tracks and lyricism. On “Call Ticketron”, El-P transforms the mundane sound of a ticket machine into havoc-reeking anthem for anarchist. On “Thieves! (Screamed the Ghost)”, the production is dreary, drags along like a dead body tied to a horse – another revolutionary anthem from the duo. The song is a response to the criticism that protests have been receiving in the past year, and the riots that  have ensued due to these protests. This album’s production is dark and dystopian, an allusion to what is in store for America.

The synergy between the MCs is undeniable, more so than ever. The album a true testament to the two’s unlikely friendship. Verse for verse, they bounce off each other like a ping pong ball, competing  with each other’s bars in mesmerizing fashion such as on “Panther Like a Panther (Miracle Mix)”. Their chemistry combines with their punchy bars to create a pungent concoction of a track, as well as stand as an homage to their unrivaled prowess. Inversely on “Everybody Stay Calm”, the two work in perfect unison, building on each bars, and feeding off each others flows. The duo is using their platform as a beacon of hope to those who feel their adversities will become worse in the coming years. “Make love, smoke kush, try to laugh hard, and live long/That’s the antidote”, Killer Mike and El-P state on the track “2100” urging their listeners to not lose hope.

RTJ3 is a new direction for the rap duo. Killer Mike and El-P have continued to mature and master their craft, moving away from the punchy, visceral style of projects from the past. Their energy still present, but it is more focused than ever. Instead of pure unbridled energy, the duo navigate through the intricate production with finessed and surgical precision. RTJ3 is a call to arms, a commentary on the state of affairs in America, and a signal of hope for whoever needed it. RTJ3 and its content could not be more poignant, all things considered.