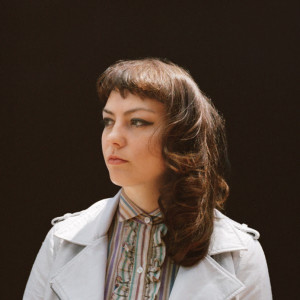 Angel Olsen is tired of being pigeon-holed by fans and media alike: “…Deal with the fact that I’m not always fucking sad!” Olsen told The Guardian in an interview. If lonely weirdos clung onto Burn Your Fire for No Witness lo-fi feel than My Woman will see sensible loners aching for human connection, all dressed up in glittery wigs with nowhere to go, clutching this record.

My Woman‘s opener “Intern” sets up as an ominous track with low synths accompanied by ethereal backing vocals. Olsen’s voice escalates alongside the track’s tension. We expect a resolution to the lyrics “falling in love and I say it’s the last time,” but it never arrives. Instead we are left with twinkling synths fading out into obscurity. By Olsen’s own admission, “something in the world will make fool of you” there’s no use in trying to bookend life.

The rest of the album extrapolates on this exploratory phase of Olsen, seeing to new sounds as she enlisted Justin Raisen to co-produce the album – previous work with Charli XCX and Sky Ferreira. Unsurprisingly, we see Olsen expand on her pop sensibilities with more melodic choruses without ever abandoning her voice in the process. My Woman is split into two sides; the first half is full of tracks that demand to be paid attention, both sonically and lyrically. An obvious example is “Shut Up Kiss Me” whose crunchy guitars accentuate Olsen’s exasperated shout-singing and defiant delivery, begging her lover for embrace. Tracks like “Give it Up” and “Not Gonna Kill You” see Olsen’s band, who were also her touring band during Burn Your Fire, shine bright with extended and ornate guitar solos. The latter half, however, feels like mid-night week at a dive bar nearing closing time; the tracks are expansive and the night is desolate. Olsen oscillates between sounding like Hope Sandoval and Stevie Nicks on tracks like “Heart Shaped Face” and “Pops,” respectively. “Sister” demonstrates the side of Olsen we are familiar with, twangy guitars, breathy vocals. Clocking in at 7 minutes, “Sister” receives the glamorous treatment of building up only to beautifully unravel upon our very ears.

My Woman’s most poignant moment comes in track “Woman” as she wails “I dare you to understand what makes me a woman”. The subject of the song could never understand, Angel Olsen is dynamic and complex. My Woman is the same: dynamic and complex. It is not an album that aims to free Olsen from the indie-folks genre that’s been draped over her, but a testament that an artist can be both loud but vulnerable, abrasive while also being dream-like. Femininity and sharpness can exist without ever relinquishing fragility or honesty.