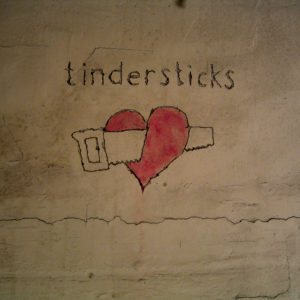 There is something contradictory about Tindersticks. Ever since I started basking in their musical presence with the first soaring notes of the beautiful “Trouble Everyday”, I have always found myself drawn, yet a little reluctant to listen to them. I’ve now come to believe that listening to Tindersticks is tiring for the soul. As calm washes over you with their sonic beauty, Stuart Staples’s cracked baritone breaks your heart with each listen and an unbearable sorrow and bitterness take hold. I had yet to listen to a full Tindersticks album before this one, but I had not heard that deep, charred voice in much too long.

“The Hungry Saw,” the Nottingham-based bands seventh studio release and first in five years, delivers everything to be expected from a Tindersticks album. A solid fusion of lounge, rock, and soul fitted for the dingiest smoke-filled bar your imagination can muster. A lot has changed since their last time out: Stuart Staples started his solo career, compiled an amazing collection of songs for a children’s album with band-mate Dave Boulter (“Songs for the Young at Heart”), the band lost some members, and they were just signed to a new label. I was a bit hesitant as I placed the CD into its player. But from the brilliantly melded, melodic “Introduction”, through the soaring and sad “Feel the Sun”, all the way to the minimal and bare “All the Love” it is a cohesive and sweeping whole of heart-breaking music.

It’s true that at times the album can feel a little over-whelming; the changes from song to song, be it subject, tempo, or delivery doesn’t seem enough to stop all of it from becoming a bit too repetitive. Though the subtler and mostly up-beat instrumental tracks sprinkled throughout the album come as a welcome breather and present interesting changes in direction, they are not enough to fully distance the listener from the heavy atmosphere carryied throughout the album as a whole. Lyrically Tindersticks are as heart-broken, lonely, and bitter as ever; yet they’ve gained an interesting air of acceptance and thus indifference. Staples’s somewhat unintelligible enunciation lets his seemingly restricted voice flow smoothly through most of the tracks and become an instrument in and of itself.

So if it’s dark and you’re feeling a little melancholic, I urge you to join us and press play. As the seamlessly flowing music makes its way through your ears and Staples’s vocals drunkenly sway the bodies in the night.