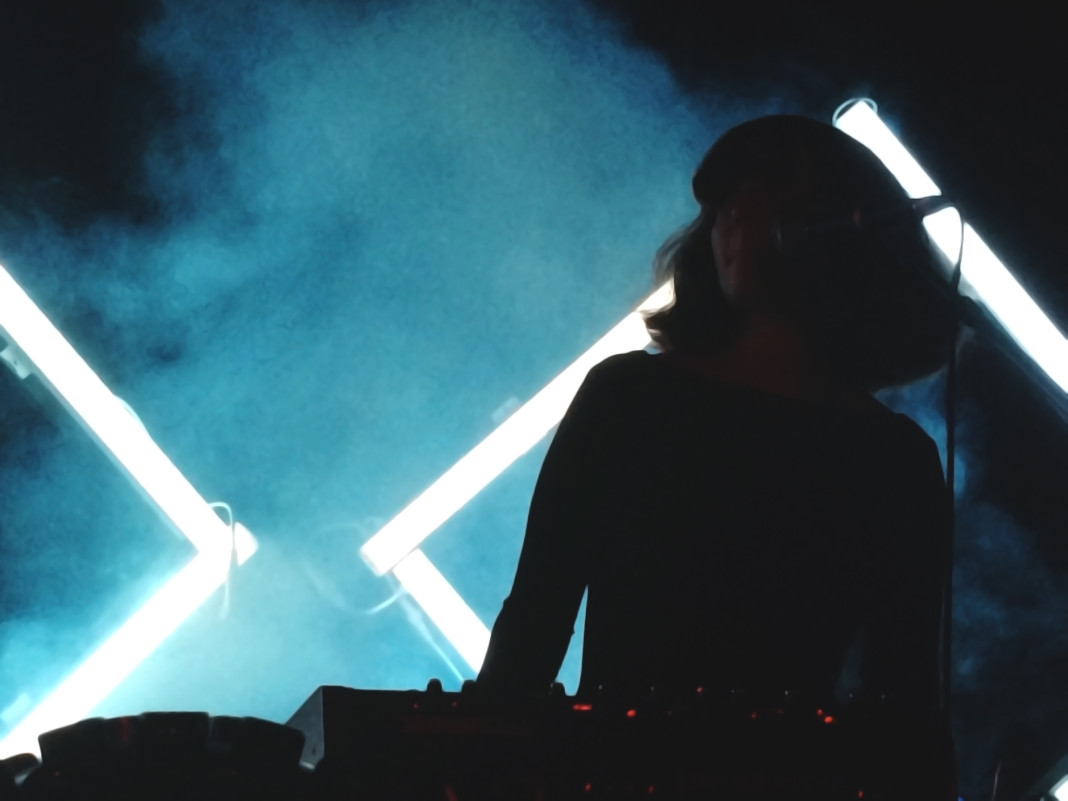 The sun was still out over Deep Ellum. Modelo signs, beads and sunglasses were laid casually on available surfaces inside and outside of Club Dada, reeking of sponsorship. The sunglasses actually had dual bottle opening capability on its temple tips, just something fun to note, inconsequential since most patrons seemed to be drinking Pabst by the can. At 7:45 pm handfuls of people checked-in to Dada for the evening, presumably eager for the great acts to play that evening. Despite the change of venue from the usual Granada Theater, it turned out to be a loaded night of up-and-coming music.

The one woman effort showcased an ambitious side, young and energetic in both sound and performance. QUALIATIK, he artist otherwise known as Arielle Herman, opened the lineup with a healthy grouping of original songs, all in the songwriter-producer spirit that many aspiring musicians bring forth. The chunk of equipment she set atop her table on stage consisted of pad banks and glowing drum sticks, which beamed and dimmed with each percussive hit in her hands. She alternated between rhythm and bass guitar as well, swaying with her body and playing with intent, although sometimes hard to hear and discern among the layered sounds. Her drums built on top of each other and oscillated louder than most of the mix, an obvious focal point and especially with her breakdowns and drops. QUALIATIK overlaid synthesized melodies via the same pad banks and banged along, bobbing in the processed. The crowd did the same gently; just the warm up for the night.

As QUALIATIK set down immediately following her set, a thin blonde woman approached the stage and grabbed some gear for the set up. Her thick braid was worn in front of her, over her shoulder, and whipped when she turned around too quickly. Eventually the table-top was void of everything but her mixer, a microphone and the cool glow of her macbook on her face. Dada was much more filled at this point, the setting sun barely illuminating the windows and doors. A thick rhythm paced from the speakers and the ambient techno resonated the venue.

Under the project name Kedr Livanskiy, Yana Kedrina’s minimal sound may have been a new one for many, but her production is something special, showcased on her latest release Солнце января, translated “January Sun,” and definitely at this year’s Texas Summer. It’s refreshing to see such an image of wildly cool electronic created from someone as stylish as Kedrina, bringing forth her Russian influence to a foreign place and having strangers vibe to it. The crowd pleasantly swayed to her gradual and solid beats, drawing people who previously camped outside on the back patio inward. And then the microphone was pulled to her face and she ambiently sung to a lo fidelity tone. Many swooned at the sight of it, but it was fantastically simple and audible. Only a handful of tracks were played for the audience and then the set seemed too quick to finish. At the end of her last track “Razrushitelniy Krug (Destructive Cycle),” she smiled while looking at the filled standing floor clapping and thanked everyone, appreciative of the time. Little time lapsed between Livanskiy and DJ Taye, the young TEKLIFE member, who mounted his CDJ onto the table promptly. A no-nonsense stance or transition, frankly, was done to start the set; a true DJ mix of fast paced footwork which edged well into the 160 bpm. Iconic TEKLIFE chops and samples, improvised as drums of sorts, chimed and skipped in syncopation. Taye cooly blended tracks of hip hop, techno and vocal samples and a look into the crowd showed bodies convulsing to the music – side effect of trying to match the tempo – but entertaining nonetheless. It’s something truly to be more heard and less described to witness a true Chicago footwork artist do what they do best. On that note, during a well picked track with extra emphasis on snappy cymbals, DJ Taye stepped back and to the side of the table, eyeballed his a available space and danced fast-paced footwork to the tee. Flashy footsteps, leg swings, arm waves, all on par with classic footwork, were showed off. The crowd ate it up. DJ Taye finished with probably the longest set of the evening but definitely brought in more people to move a bit. His music might have detoured some people as well, noting a woman who stood in the front row with a finger in both ears and eventually leaving her spot about halfway through. DJ Taye’s intensive and nuanced music of the TEKLIFE brand was a much needed intermission, juxtaposing the previous two and two to follow, and yet, a brilliant match for the lineup overall.

By the time Yumi Zouma hit the stage the crowd had gotten to its largest amount. The band’s decor was nothing extravagant, only a backdrop with the band’s name in purple LED lights which illuminated the faces of fresh-faced concert-goers. All eyes were on the New Zealand quartet, but Yumi Zouma’s electro-pop earworm tunes seemed to be a slow burn for the concert attendees. Show-goers seemed to be more interested in talking over the music than Yumi Zouma’s set. The gentle vibes emitting from the stage weren’t ample enough towards the beginning to get its needed attention.

In due time, Yumi Zouma and their dreamy daze won the crowd over. They alternated between performing songs off of their first two EP’s such as “Alena” and “A Long Walk Home for Parted Lovers” as well as “Keep it Close to Me” and “Yesterday” off of their first full length Yoncalla, released just this past May. Christie Simpson’s tender vocals and pop sensibilities made for an ethereal evening all culminating in the last song of the night, “Catastrophe.” The crowd erupted in applause, but it was bittersweet when everyone realized that this was inevitably the last song off of their set. The New Zealand quartet worked the crowd over and fed off of the excitement bursting through seams. Band members laid on top of the speakers and even went into the crowd during the last encore truly making the most of the night. The LED and banner were removed and replaced with large light fixtures for the backdrop. Fluorescent tubes were structured in 3 separate diamond shapes then beamed on, hovering just upon the floor and supplying ample light. A superb looking disco ball was placed in the foreground, completing the production, noted to be much more than her previous two visits to Dallas. Jessy Lanza’s tour mate better known as ‘Tory’ approached the drum set and fiddled with the connected Macbook. Many cords twisted and plugged in to rig the impressive setup, the biggest of any of the 5 acts that night, and undoubtedly the best. The audience had relatively thinned out after Yumi Zouma, which was fine – more room for dancing. Tory, Lanza and fellow setup crew mate all left the stage after finishing final checks only to return a minute later and the audience cheered.

The ominous hum of synthesizer bellowed over the superior sound system. Tory kicked on the bass drum pedal for initial build for the track “Never Enough.” On the one-two, Lanza’s synth crunched on with a glorious ring. Pure electric stabs of her crafted chords wailed to an infectious beat; the front three rows were full on dancing. This was exactly to be expected from a Lanza track, especially with her song repertoire now doubled with her recent sophomore release of Oh No. Lanza yipped intermittently for ad lib effect, a commonality throughout her set, sang her notes and moved to the next song.

The fog machine blew in front of the fluorescents for a cosmic scene, silhouetting Lanza and synth perfectly. This fit well for her more subdued tracks such as “Fuck Diamonds,” “Begins,” “Pull My Hair Back,” and the incredible “Vivica.” The latter was an example track which boasted the impressive bass lines of the night’s music; so good it vibrated your chest like a gentle massage. Jessy Lanza’s new album hit hard in general, however, and loosened up the remaining audience members for grooving. Without prompt or transition “It Means I Love You” came on and popped each individual body to a side-step, kick or jump, claiming its spot as the fan favorite in an instant. DJ Taye should have came onto the stage to show off his footwork once more during the breakdown. But regardless of what could have, what did happen was still stellar; easily Jessy Lanza’s best live set in her Dallas performance record, despite the disco ball never actualyl being used.

The duo ended the evening with Pull My Hair Back’s hit “Keep Moving,” making sure all energy was spent if it wasn’t already over the past 6 hours. In retrospect, all 5 artists were fantastic and brought respective fanbases, with the exception of QUALIATIK which might have just been billed too early to start. Perhaps five artists on the bill was almost too much music for one night. A reasonable bill could have been trimmed down to just Kedr Livanskiy, DJ Taye and Jessy Lanza, suggesting that Yumi Zouma and QUALIATIK didn’t quite fit the lineup the other three produced. It was clear however that a majority of the fans did come indeed for Yumi Zouma who did a dreamy performance. GvB always brings forth a variety of acts with each show and we’re appreciative of the curation that they, along with Margin Walker and sponsors, put forth for Texas Summer.