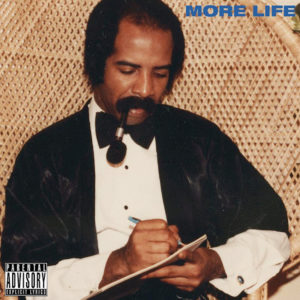 Hinting throughout his Summer Sixteen tour, Drake had something up his sleeve. With the release of “Two Birds, One Stone”, “Fake Love”, and “Sneakin’”, the anticipation was building for More Life and in due time we have yet another Drake release for 2017.

His 22-song “playlist”, More Life, featuring the singles and alongside many features ranging from British MC Giggs all the way to our very own Young Thug.  Each project garners mass attention, but our expectations have irrefutably changed since the sappy, emotional R&B era of Take Care. The more upbeat, funky island man singing about the dance floor, as we can hear in recent single “One Dance” takes front stage again, but Drake can’t really be put in a single box anymore. Is he a hip hop legend or a pop singer or a reggae star? Well, how about a Canadian/Jamaican/(apparently)British pop singer and rapper. The major difference is the huge team backing him along the way.

Singles of Views introduced island slang and upbeat dance songs like “Controlla” to the Drake repertoire, impressing all tings, whereas heavy, aggressive hip hop switched up who we thought was Drake on If You’re Reading This It’s Too Late – to a certain affect both of these are carried over. A playlist isn’t a mixtape, as is a mixtape isn’t an album. More Life shouldn’t be registered as a completed, thematic project but rather a compilation of songs and artists that share certain sounds and influences. More Life is a pretty decent mix of things.

London flavor with MC Giggs on “No Long Talk” and “KMT” and Skepta on “Skepta Interlude”; island feels with Sampha on “4422”; a Jamie xx inspired production (seemingly) on “Passionfruit”; yet another feature for Quavo, supplying southern hip hop with Travi$ Scott on “Portland”. It’s varied. Perhaps “playlist” is the most apt classification.

South African DJ Black Coffee and U.K. singer Jorja Smith on the song “Get It Together” received highly positive attention from South African twitter fans. Overall, the playlist has a little bit of everything and it shows a clever, upbeat, optimistic, and versatile Drake. Although the playlist has such a dynamic range of songs to choose from, they all fall together well into the same vibe. That’s just boring. Drake’s pop-stardom began his shift into a zone that is repetitive and dull. Catchy and fun songs lack the certain appeal towards finessed craft in the realm of hip hop, or R&B, or pop – this is the issue – because each song put out is in formula.

With the exception of notable, new features with the Canadian artist, More Life doesn’t quite hold the weight of prior, substantial releases. It’s pretty guaranteed that every new Drake song will be a number one hit and top the charts, but at this point he isn’t releasing anything that will surprise us. It’s just a lot of the same thing and this release felt very uneventful. Will we be singing along? Yes. Do we have a choice? No. Drake music means radio takeover, ear worms, and memes. After some time the music will take the wayside.