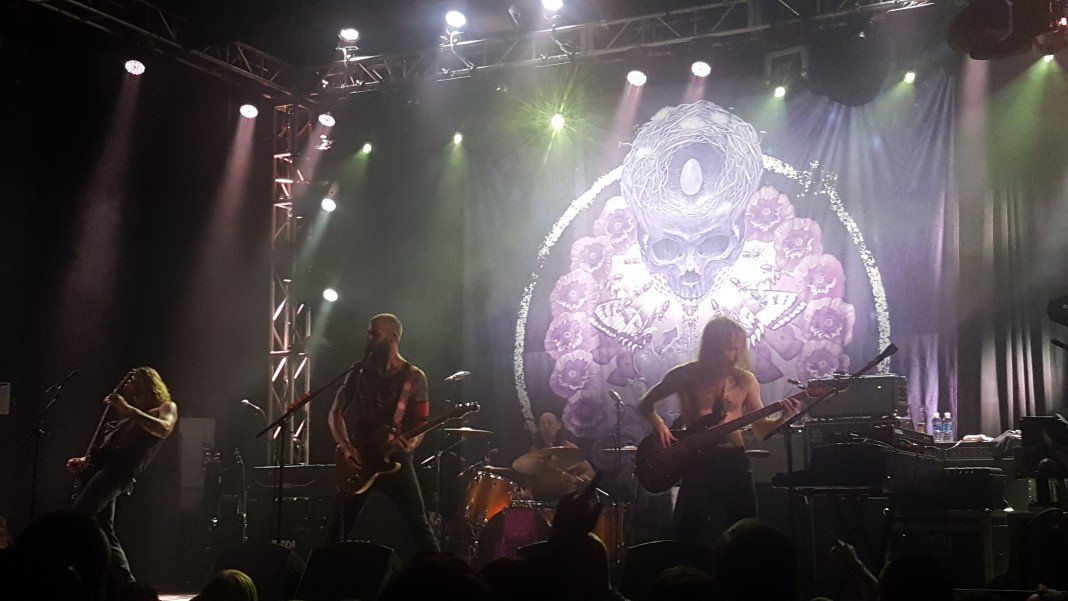 The Granada Theater slowly swelled with an eager crowd. Random waves of shouts punctuated the tides of fans. Some were there to head-bang others to soak in the music; all were ready for the show.

Pallbearer opened the show with aplomb as they surged into their first piece. The crowd reacted warmly as Pallbearer showed off their classic metal roots and alt-metal flair. This was visually complimented by the guitarist’s classic Flying-V.

After a strong opening performance the swell of watchers settled down. Time was spent watching The Granada’s Twitter feed, which was projected in front of the entire crowd. I knew I was in a polite audience when the most audacious things posted were about which characters the theater management played in an online game.

Finally the projector rose and the crowd roared. A banner hung from the back of the stage. Imprinted was a skull with a nest that contained a single egg balanced on the top; surrounded by butterflies, bees and flowers. The artwork was undoubtedly created by John Baizley, front man and rhythm guitarist for the band. Baizley is not only the core of the band but the creator of all their beautiful album covers. The band took the stage then dumped “Kerosene” onto the crowd. The venue burst at the energetic start. Baizley’s presence was a wind that stoked the flames, his mere gestures sending the crowd into roars and crackles.

After tearing through two more songs the band finally let the crowd take a breather. While setting up for the next few songs bassist Nick Jost set aside his bass and filled the theater with the cosmic synth sounds that are scattered throughout the bands Purple album. The gentle synth led naturally into the opening of “Shock Me.” The drums were thunder as the crowd eagerly bellowed the refrain.

It was around this time of the show where you could see the two ways a Baroness fan typically behaves at a show. The head-bangers thrashed to the heavy metal sounds while others calmly soaked in the technical rhythms layered throughout each song. Baroness plays a unique blend of alt and prog-metal that has captured the attentions and taste of a variety of fans.

Augmenting the performance was a nice bit of visual flair. The lighting on band and banner would change according to the album a song came from. Purple for “Purple,” yellow and green for “Yellow & Green” and so forth. The band was also no stranger to the niceties of crowd interaction. Midway through Baizley and guitarist Peter Adams related to the crowd that much of Blue Record and Yellow & Green had been written in Dallas. This and the revealing of new songs were met with wild affirmation. Drummer Sebastian Thomson laughed the whole time. The band never tired, playing with a level of enthusiasm and skill that at times surpassed their recordings. This enthusiasm was perhaps most visible near the end of the show. The crowd didn’t even have time to get a chant going before Baroness popped back onto the stage and launched into a two-song encore of “Isak” and “Take My Bones Away.”