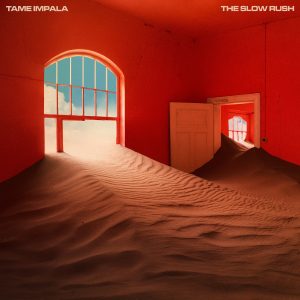 After an almost five year wait, the neo-psych turned synth-disco Tame Impala released the highly anticipated The Slow Rush, the follow up to the 2015 hit Currents, and its singles were met with warm reception for their captivating instrumentals and introspective lyrics. While the rest of the album tends to fall flat in both categories, the songs on the album are consistent with the album thematically and for the most part enjoyable despite the lack of innovation since Currents.

Kevin Parker, the band’s lead, spent the last half of a decade writing, recording, producing, and mastering this record attempting to grow and develop the sounds of Currents, but The Slow Rush’s twelve songs lack a lot of the punch that the bands previous three albums had to offer. In this LP, Kevin finds himself focusing on time, a popular subject for psychedelic artists, but fails to create songs that strike an emotional or personal chord with me (except for “Posthumous Forgiveness”) even though this album dedicates itself to be an introspective journey. Beyond this, a handful of songs, especially “Lost in Yesterday”, feel like rewrites of songs from Currents which only cheapens the album and only disappoints me with each listen. On the other hand, this album does have several high points where Kevin isn’t too washed out in reverb and delay effects where his lyrics come through clearly with poignant melancholy about the death of his father and past mistakes. Although I complain about the instrumentation, there is nothing wrong or even boring, the instruments come across clearly with intricate melodies and progressions. The problem lies in the over use of reverb and delay that start to distort the pristine quality that is so integral to Tame Impala because Currents was able to move so far beyond these basic psychedelic effects to create incredible songs, but The Slow Rush seems to use these as a crutch.

Overall the album is an enjoyable listening experience, but there is also a lot to be left desired from the album. I hope that Kevin is able to return to a more Currents or Innerspeaker sound without the use of cheap gimmicks or reworking his most popular hits into new songs to increase the popularity of the album. The synths and keyboards on this album paired with Kevin’s talent on the drums drive home that this is a Tame Impala project and his desire for growth beyond the classic Tame Impala guitar and bass centric songs of the previous three albums.