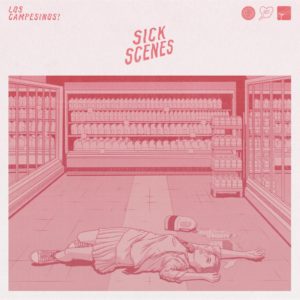 We all have that friend from high school who never grew up. They had loads of potential but were never able to disassociate themselves from their youth. Eventually, never amounting to anything, they get stuck in their hometown. Los Campesinos! is not that friend, avoiding the downfalls of many bands before them. After a four year hiatus, the Welsh Twee-Pop outfit return with a refreshing new record.  On Sick Scenes, they honed their youthful energy – not letting it define them as they grow physically older – and mature on their sixth studio album, molding that youthful energy into one of their better records to date.

The album moves away from the hopeful theme of their previous record No Blues, and traded in for the harsh realism of growing up. Sick Scenes still contains its fair share of stories – reckless endeavors abroad, drinking until they drop and falling in love. The difference LC! find themselves struggling and dealing with are the consequences of their actions – all the debilitating hangovers, profound heartbreak, and ubiquitous anguish.

The album opens with a bright, energetic “Renato Dall’Ara (2008),” a muted beginning that flows into barreling guitars and recollections of a drunken night abroad. It’s a short, well executed opening, setting the pace of the album as well as the theme of adulthood; many of the tracks on Sick Scenes are times of recollection and reflection. LC! attack their growing age by developing a warmer, more intimate sound, instead of imitating their spry former sound, and without sacrificing the fast-paced energy their fans know and love. They do so with clever lyricism and wordplay throughout the record, exemplified in tracks likes “5 Flucloxacillin,” where lead singer Gareth Campesino sings with a dynamic, wistful tone, coming to terms with growing older.

LC! shows a more concerned side on “The Fall of Home”, a clever play on the saying “fall of rome.” As it is an obvious commentary on Brexit and another sign of the band’s growing maturity with awareness of the changing world.

One of the records pitfalls is its inconsistencies, but a flaw that is almost overlooked due to the sheer strength of many of the songs. Tracks like “I Broke Up in Amarante” and “Sad Suppers” own an infectious chorus which is impossible to ignore, and feel like effervescent homage to their younger years, but lack the thematic ties – a feeling of continuity and progress which the album yearns to show – and an overall repetitiveness hold the record back.

Even so, after a four years hiatus, Sick Scenes is by no means a disappointing return. Los Campesinos! have repeatedly put out good records for as long as any of us can remember and now deliver with a great record once again. The band have handled their growing age with surprising maturity, and without compromise of identity.