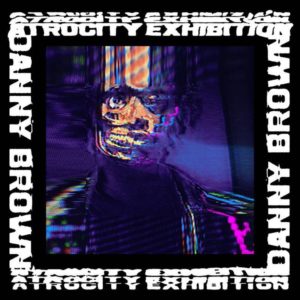 If there’s anything Danny Brown, the 35-year-old Detroit MC, excels at, it’s making records that turn parties into functions with a capital F. Songs like “Smoking & Drinkin,” “Grown Up,” and “Adderall Admiral” have all become synonymous with Brown’s perceived image. But what Brown is not given enough credit for is ability to articulate pain and struggle in brutally honest bars, which he masters on his fourth studio album, Atrocity Exhibition.

More than anything, Exhibition is an examination of Brown’s mortality in the face of a lifestyle laced with substance abuse and endless parties. This is most clear on the album’s cover, where Brown stares blankly at the listener while half his skull sits exposed. If Brown is racing towards death, he’s already almost there.

On nearly every track, Brown battles with his demons in a seemingly hopeless and uphill struggle to numb his pain. On “Downward Spiral,” the melancholic opening track, Brown warns listeners “your worst nightmare for me is a normal dream” and that theme sticks throughout. Lines like “Bought a nightmare, sold a dream/ Happiness went upstream” on “Rolling Stone” explain why Brown laments “Can’t quit the drug use, or alcohol abuse/Even if I wanted/ Tell you want I’m gonna do/ I’ma wash away my problems, With this bottle of Henny” on “Ain’t It Funny.”

Sadly, Brown knows his fate, observing that “Joke’s on you, but Satan the one laughing,” but he can’t change his ways.

It’s a theme that’s seen often in recent hip-hop releases, somewhere between Vince Staples battling against suicidal thoughts brought on by the weight of stardom on his Prima Donna release from last month or Future’s struggles with substance abuse. In an era where flexing and stunting have dominated the airways, Brown chooses to take a more honest approach and speak candidly about his inner turmoil.

More importantly, Brown’s art is one that stems from the environment he comes from. During his come up, Brown’s hometown saw some of the worst economic struggles for a single city in American history. Once the center of the American economy, with car factories churning out Fords and Lincolns like cookies out of an oven, the Motor City now is a shell of what it once was. Three years ago, the city filed for Chapter 9 bankruptcy, just a few years removed from reaching a unemployment rate of 29 percent brought on by the Great Recession.

When nearly a quarter of a major American city is out of work and the nearby city of Flint can’t even get clean water to its residents, it’s no surprise Brown and others from Detroit experience the endless pain of trying to escape their past and constantly failing.  Like a hamster on a wheel, Brown and his peers keep running a race that always puts them in the same place as where they started. Brown reflects on this throughout the album, casually dropping mentions of stick ups for Jordans and drug dealing like he doesn’t even notice anymore. It’s simply part of his reality.

Still, Brown has his bright moments on this gloomy journey. He shows out on his unprepared competition on songs like “Really Doe,” where he forms a super group with Kendrick Lamar, Ab-Soul and Earl Sweatshirt to drop lines like “Only way you’re next to blow if you be strapped with C4.”

Thankfully, there’s a light at the end of the tunnel for Brown on the album’s last track, “Hell for It.” Here, Brown owns up to his failures and hurdles and still comes out a champion. He tells listeners “So my task, is to inspire your future with my past.” He tells fans he doesn’t want them to go through what he’s had to face, he’s already been to hell and back so they don’t have to.

If listeners can get through the dark lows of Atrocity Exhibition, they’ll find a happy ending, but it’s a hard one to get to. Brown makes it known he’s been through a lot, but just like his city, he doesn’t ever get knocked down without getting back up. It’s Detroit vs. everybody and Danny Brown is leading the charge.