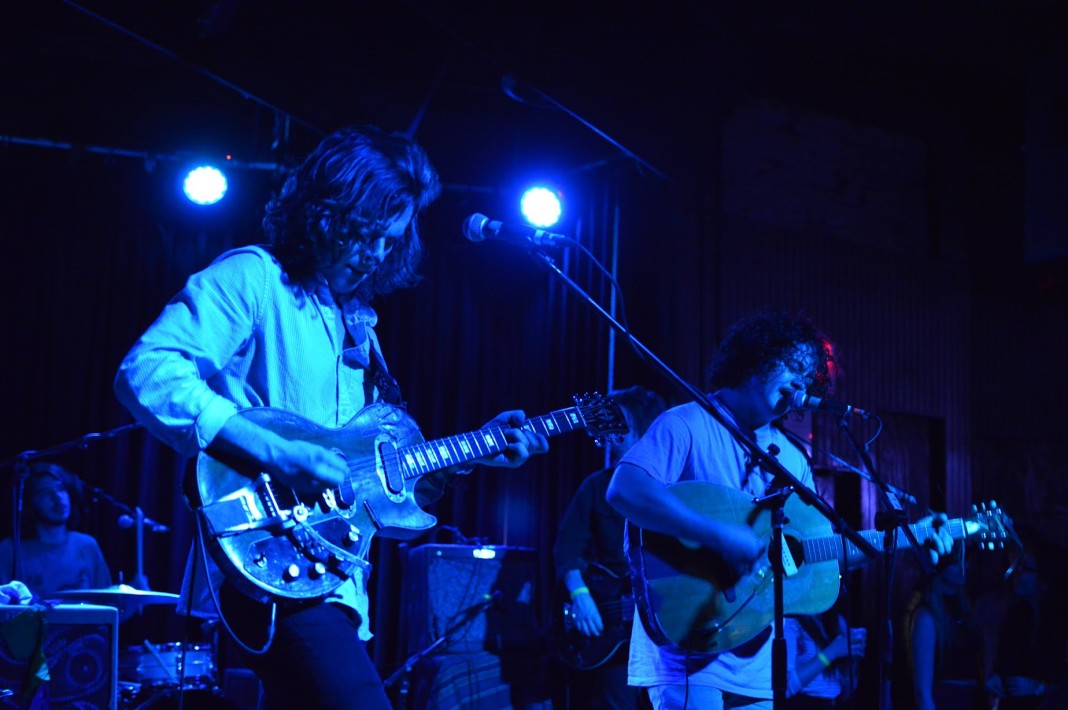 The Districts have earned accolades from almost every big festival in the nation, and there’s a reason for that. I can’t point to a singular moment and say, “That’s it. That’s what made the concert great.” It was everything. The energy, the music, the rocking – everything came together to create one of the best, most captivating shows I’ve ever attended. After a short set from openers Sun Club, the show began.

The four-piece band from Lititz, Pennsylvania had to squeeze their way through the crowd on the Wednesday night to reach the stage, climbing over equipment cases to the sound of hollers and cheers. They didn’t waste any time in picking up their instruments and launching into their first song, “Chlorine.” His shoulders hunched and his eyes closed, the lead singer, Robby, sung/murmured the lyrics while the other members rocked beside him. When they launched into the anthem-like interlude in the middle of the song, Robby stumbled back from the microphone and picked out each note on his electric guitar while the crowd nodded their heads and swayed to the beat. From that song’s quiet ending, they launched into a guitar-heavy new song with mumbled lyrics at which the crowd nodded in appreciation. Then came “Hounds” with its heavy beat and periodically uplifting guitar notes. The crowd grooved as the song slowly devolved into a loud, heart-pounding cry for help with the guitarist bending over and shredding next to the amp and Robby screaming, “Hounds in my head,” over and over until it all cuts off for the last line, “Do they fit right yet?”

Throughout the night, the crowd called for “Long Distance,” from the band’s first album, Telephone, and about halfway through the set, their request was granted. The relaxed guitar intro turned into a moment of heavy drums asking “Isn’t it strange to be alive at all?” Then back to the guitar for the chorus that everyone yelled: “Long distance, slow time/ Is it easier?” People swayed and waved their arms and sung as the song got progressively tense. For the last two minutes of the song, Robby recited the chorus, his voice rough from screaming the words, as the guitarist made a series of static-filled sounds from next to the amp. Towards the end of the set, the drummer started up the regular beat that is the backbone to the song “Bold.” The guitarist filled in the gaps with guitar effects while Robby rocked back and forth, strumming a cord periodically, and the bassist accompanied the drummer’s beat. They finished with their best known song off their latest album, A Flourish and a Spoil: “4th and Roebling.” Robby finished the song breathless, then pulled off his guitar to the crowd’s determined chant, “Encore, encore, encore.”

After a brief meeting in the back of the room, they climbed back on stage and launched into the final song of the night, “Young Blood,” the song that showcases the band’s ability to change the mood mid-song and build up to a furious crescendo. During the long, tense interlude of intensifying guitar, the band congregated around the drums, bumping shoulders and nodding heads to the beat. Finally, to the fading, tired notes of the song, Robby went back to the mic and sang the last lyrics between breaths as the crowd yelled and clapped and cheered for “One more song! Two more songs! Five more songs!”