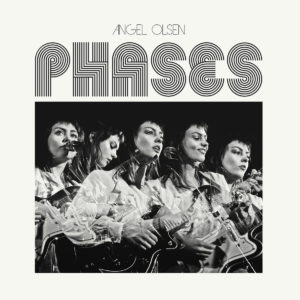 To say the least, Angel Olsen has been seeing quite some success from her last album MY WOMAN and shows no signs of stopping. A extensive international tour of some of the nicest theaters known to artists, being featured on The Man in the High Castle’s album Resistance Radio with a cover of “Who’s Sorry Now,” and also being featured in Aussie-pop maverick Alex Cameron’s hit “Stranger’s Kiss,” are just a few of the things she’s been doing this year, and now fans have an offering of some intimate and career spanning demos, covers and B-sides to keep them engaged and listening. Phases gives the die-hard Angel Olsen fans a deeper look into her catalog of music and the progress and development of her music through a collection of unreleased B-sides, demos and covers.

Most bands and artists that release these types of collections usually get looked over by the majority of listeners, but Angel Olsen’s Phases holds up on its own and not as some easy throw away offering. The last time listeners might have gotten a strong compilation of B-sides and covers from an artist would have been The Killers’ 2007 Sawdust.

If I had to give the casual listener one song to listen to off of the album, it would have to be her cover of Bruce Springsteen’s ‘Tougher Than The Rest’, which gives us a extremely intimate and stripped back version of the song that will make you really take in all of the gloriously gritty and intimate imperfections of the track and also focus in on Angel’s voice.

With Angel’s signature style of intimate and sultry singing accompanied by her churning chords on a guitar, matched to the overall grittiness and echoes in these recordings gives the album the same feelings and sounds that old Patsy Cline and other old school country records can give you as you listen. For cloudy, overcast mornings or a rainy day, this album would really make the day complete and give you a good reason to stay inside and just reflect on the lyrics of her songs, like in “Fly on Your Wall” with “I found a feeling inside, Or should I say it found me, I turned into someone I, Never imagined I’d be.”

With this being a compilation of demos, B-sides and covers that Angel has done over her career, there aren’t many critiques that can be said. The most I would say is that the lyrics and recordings of most of the songs are very minimal, rough and definitely show that they are just what they are – demos and B-sides, but they’re strong enough to give longtime fans of hers and even newer fans something to obsess over and really see her development as an artist over the years and how she’s gone from her humble beginnings to her last major release MY WOMAN.