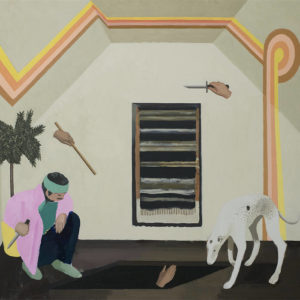 Philadelphia experimental rock band Palm’s latest project, Rock Island, is their best one yet, emphasizing every aspect that makes them interesting, and then pushing it further into new realms. The band is truly unique, as characterized by all their past releases such as their Shadow Expert EP, but Rock Island is the most complete album they have created yet.

Five seconds into opening track “Pearly,” I knew this album was going to be special. It starts out with a chaotic flurry of synth notes, before suddenly switching to what sounds like an angelic choir. This short 5 second section of the song, introduces the style that characterizes Rock Island. Intricate, chaotic rhythms that are briefly interrupted by radiant melodies before switching back.

They cycle through repetitions of different sections in each song, creating a patchwork of sounds that repeat just enough without becoming fastidious. Very little stays constant throughout these patches of music. Time signatures and tempos are frequently changed on a whim, throwing the listener around various sections. A lot of the time signatures are not typical time signatures either, and they lead to incredibly complex rhythms that almost don’t make any sense, and although they’re tumultuous and sometimes jarring, they’re oddly pleasing.

The vocals help keep everything grounded. Amid all the turmoil in the tracks, the vocals add another fuzzy layer, but also bring harmony and help keep everything together and sounding cohesive. The lyricism on this LP is poetic, with lines such as “Saw a vision of us skipping ahead in time/Now we’re out of step, but you don’t ever seem to mind,” on “(Didn’t What You Want) Happen,” which describes a failing relationship, where the singer is realizing that for the relationship to continue, the other person must change. This track is a wonderfully somber closing to the project, which is a stark contrast to this line from “Pearly,” “I want nothing but the best for us.”

“Composite” was first heard on their Audiotree Live session, at the time it was still untitled, so it’s nice to see it getting an official release, although it has been modified. The version on Rock Island is at a slower tempo, which I initially disliked because I was used to the faster version, but I’ve learned to appreciate the slower tempo which trudges along, almost like a giant stomping through a forest. Similarly, “Swimmer,” as its name suggests, paints a scene of someone lazily floating through a pool on a hot summer day.

The cohesiveness of this project is impressive despite the songs themselves being so jumbled. Even “20664” which is more electronic than the rest of the release fits right in, and gives the listener a nice breather before finally moving on to the closing track. Part of their one-of-a-kind style can be attributed to their recording process; they put MIDI triggers on their guitars and drums that they can edit after recording.

Palm is one of the most exciting bands as of recent, and Rock Island solidifies their position as a band to keep an eye on. They’re creating incredible music, and they’ve done nothing but improve and continue to develop their iconic style. Rock Island managed to be everything I wanted out of a Palm album, and so much more.