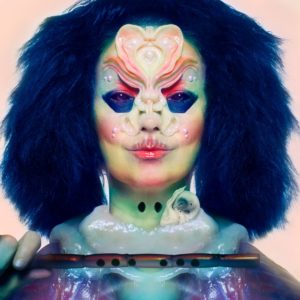 Björk detailed the heartbreak of her breakup on the 2015 album Vulnicura. Within those tracks, she displayed her wounds and laid bare her anguish to make an emotional record that grounded her musical style (as much as Björk can be grounded) and made it more approachable. On Utopia, Björk’s sound is as immense and as intricate as ever. She has a full heart again that is ready to spread love with a myriad of messages interweaved with flutes, harps, and birdsongs.

Much like Vulnicura was a testament to the pain love can bring, Utopia is a testament to the joy and promise love can create. “Arisen My Senses” starts the album out on a powerful note, with chime hits, bird songs, and harps interlaced with Björk’s voice which stands out against the music, but still manages to flow along with it. While each song is a different statement, they are all musically connected with the instrumentation and sounds, which make for a varied yet strong and cohesive album.

Natural soundscapes are one of the ways the album connects its parts; bird songs are spaced throughout many of the tracks, while bestial growls are used in the monumental “Body Memory” to contrast the idyllic atmosphere established early in the album. Björk’s collaborator for the album, Arca, helped to create a layered and masterful production that balances the delicate patterns of flutes and strings with more industrial and electronic sounds. The result is a beautifully saturated sound that continues all the way through the album, but never overstays its welcome.

Different messages are presented throughout the album that all come together to help build the utopia Björk is hoping for. Two “music nerds” text each other and fall in love on standout track “Blissing Me,” while the heartbreak from Vulnicura is revisited with a new perspective in tracks “Losss” and “Sue Me.” Björk uses her incredible vocal range and powerful voice to channel all of the love she now feels into every ambitious track on the album.

While Björk is spreading her enchanting visions of love, it can occasionally seem like these are visions only she can see. While it’s easy to get lost in the symphonies of intricate musical patterns, sometimes it can feel a bit like Björk is escaping too far into her ideations and leaving behind the rest of the world. But maybe that’s the point. Björk’s idea of utopia does not fit with the rest of the world, and her messages can feel perhaps out of reach at times. But that’s what makes Utopia such a powerful record; it rises above the pain and heartbreak of our world and envisions a future that we can’t yet touch, but we can hope for.