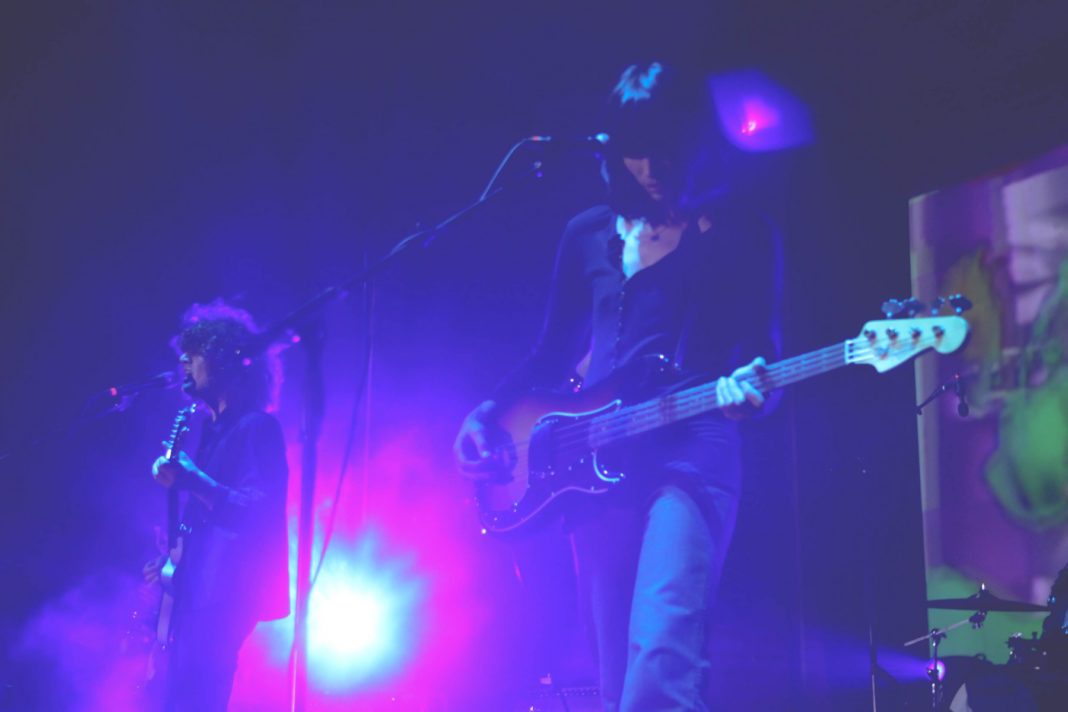 If there’s one lesson we learned while at Austin Psych Fest, it’s that you should bring a bandana with you. For the whole festival, not just during the daytime when you can see incredible amounts of dust in the air, but at night as well. The weather was great and very summer-like. Hot during the day, and chilly at night. What we might want to consider next year: camping to get the whole Pysch Fest experience. One of the first bands to take the main Reverberation Stage on Friday was the Black Lips. Their set started off as a rather mellow set that later turned into a typical Black Lips energetic scene they are often known for when performing. The band played new tracks from their latest album, Underneath the Rainbow (March 2014), as well as some old favorites such as “O Katrina!” that had the crowd dancing from beginning to end. Although I was on the far right, I heard after their set that a pit did in fact start. Although the Black Lips played a great set, it wasn’t entirely energetic, which was something I was hoping for being the last set of the first day of Austin Psych Fest. – Yazz

The sun had long set on Day One of Austin Psych Fest and many festival goers could be seen with swarming like fireflies in the dark down to the Elevation Amphitheatre stage down on the river at Carson Creek Ranch. Husband and wife duo, Aaron Coyes and Indra Dunis, formally known as Peaking Lights, were taking the tiny stage set on the edge of the river running through the festival grounds. The elements were quite perfect for the duo’s fleeting electronic beats, tape loops, and vocal harmonies layered into waves of haunting four track noisy bliss.

Their set was especially mesmerizing given the venue’s steep drop off layered with levels of dirt seating area for that overlooks the running river. An alluring video was projected over the river and onto the wooded area backdrop standing tall in the background. Dancing to favorites such as “All the Sun That Shines” in the dark while a blend of warm and cool colors blanketed onlooking trees was both a visually and emotionally arresting experience. The duo mixed in cuts from both 936 (2011) and Lucifer (2012), creating the perfect psychedelic pop soundtrack for a chilly, stoned evening down a haunting river bank while mysterious haunts masqueraded in the forest across the river. La Femme was interesting band. From their fashion to their adorable broken english. Their favorite phrase had to be, “F#%@ yeah!” because they said it at least once or twice in between sets of songs. The band to the stage at the Levitation Tent promptly at 10:15pm. This guitarist pictured above was my favorite. He looked so crazy, yet so calm. This French psychedelic rock band was very upbeat and let’s please not forget their band member who went crowd surfing with a keyboard. Literally, surfing. SERFBORT. Had to. For not being too familiar with this band, it was definitely a good time.

A Pure X set in the mid-to-late Saturday afternoon at Austin Psych Fest may have been the best way to cool off from the peaking temperatures hitting folks at the festival grounds. The sun had long been baking everyone, but while huddled in close to the shade near the stage for the beginning of their set, a breeze as cool as their jams swooped in as soon as their set began. The Austin natives did not disappoint, creating breezy psychedelic dream pop from languid, distorted guitar rhythms that they have come to be recognized for. Not saying that being from Austin already has anything to do with it, but the Black Angels were, of course, superb. It was like everyone had been waiting all day to see these guys. The Black Angels took the Reverberation Stage around midnight. It was a great end to a Friday night at Austin Psych Fest. Despite not having a sunset slot during the festival, it made the show just that much more visually appealing as well as seamless. The band had a fourteen song setlist that included “Indigo Meadow” from their latest album, Indigo Meadow (April 2014), as well as favorites such as “Phosphene Dream” that was greeted with cheers from the crowd. The set ended with another familiar favorite, “River of Blood.” It was a good dose of Texas pride seeing these dudes. -Yazz Definitely up there with my top favorite acts this weekend. Of Montreal was a total dance party. I left their set wondering why I have never seen them in the many times that they’ve been through Dallas. The amount of crazy colorful visuals going on were enough to make the festival goers tripping in the back lose their minds. Kevin Barnes is fascinating to watch on stage. The amount of energy that poured from him throughout this set was immense. The crowd was far from tamed, especially when the band started performing “Suffer for Fashion.” The set ended with “The Past Is a Grotesque Animal,” which couldn’t be more fitting for a set like that. If you’ve never seen Of Montreal, don’t pass up the chance the next time they come through. – Yazz

You can find out Austin Psych Fest Pt. II Coverage by clicking here.