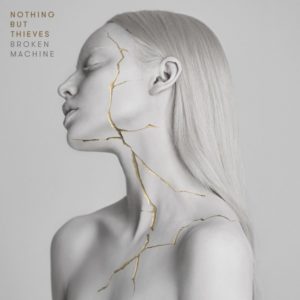 Nothing But Thieves has just released their second full album, Broken Machine, which is a good compilation of indie rock that experiments with some electronic and acoustic elements, but isn’t necessarily groundbreaking. While listening to this album, the feeling that I had the most was familiarity. For many of the tracks I could think of a song by another group that was very similar, and overall none stray very far from within stereotypical indie rock. Don’t get me wrong, I love me some indie rock all day every day, but for a new album, I like to feel like I have heard something really new and fresh.

The vibe of the whole album has similarities to Hot Fuss era of the Killers or new Imagine Dragons with lots of belted catchy choruses and guitar riffs and accents of electronic refrains. “Live Like Animals” sounds uncannily like a Twenty One Pilots song with rapid sing talking over fast drum and guitar beats. “Soda,” though a great emotional and chill song, is a dead ringer for “Trouble” by Cage the Elephant, especially the beginning guitar melody. “Broken Machine” has a great groove, but I can’t help but think that part of why I like it is that the falsetto and slow flow reminds me very much of old Maroon 5. I am saying that I like it because I do like all of these artists so it is nice to hear more like them, but it doesn’t push the comfort zone in any way.

The two songs that did feel the freshest to me were the stripped-down ones to just acoustic and piano, “Sorry (Acoustic)” and “Particles (Piano Version).” You can clearly here Conor Mason beautifully belting and emotionally warbling in these two. There are millions of stripped down renditions of songs out there, but listening to simple, charming music is something that can’t ever be over-done. “Afterlife” is another noteworthy song with an ominous, slow groove that works very well with Mason’s voice and doesn’t immediately make me think of another band, so bravo. The most groundbreaking song of all in my opinion is “Number 13.” They utilize juxtaposed levels of volume that creates a high energy, catchy tune that you can’t help but dance to.

It is somewhat of a miracle that this album even happened. It was written on the road of their tours which hit many unlucky bumps. Just before a big show in Budapest, the lead singer was cutting ginger when the tip of the knife flew up and got lodged in his eye. Then as they flew to Shanghai, the airline lost all of their luggage, and if you thought it couldn’t get worse they had a salmonella outbreak as well. After all this bad luck it’s praise-worthy that they got this all together at all. In conclusion I would say it is definitely an album worth listening to, but I could listen to a few other albums and have a pretty similar experience.