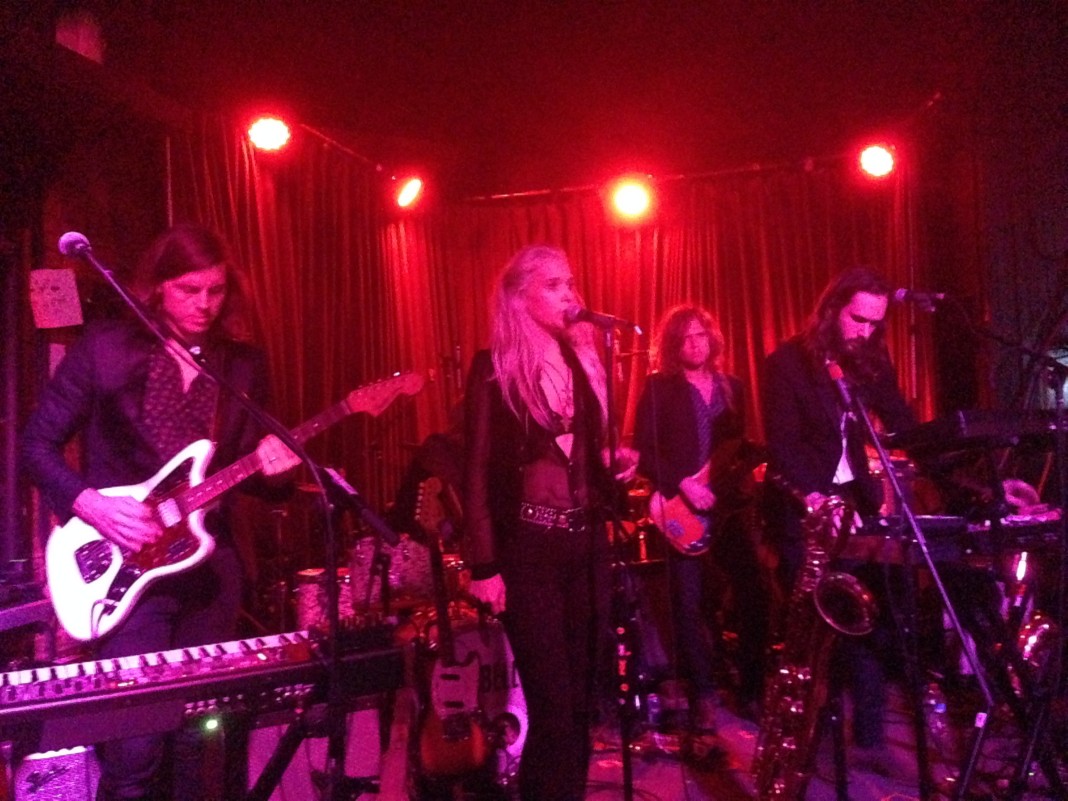 Last night, Django Django fans lined up outside Club Dada in wait of seeing not one but two lovable bands, who drove three days from LA to play there. Although the show was originally scheduled for Grenada Theater, a much bigger venue, there wasn’t an overwhelmingly large crowd, which made the show even more intimate than it would’ve been merely because of the small room with no barriers to the stage. Both Wild Belle, the opener, and Django Django put on simple but memorable shows. Wild Belle came on at 8:00 sharp, and their funky, psychedelic sounds immediately drew in the crowd. Natalie Bergman (vocals) powered through old songs and new, playing several tracks from the record they’ll be releasing in January and closing with the obvious crowd favorite, “Keep You.” The only way describe her voice is as the voice of an angel who’s been smoking for 10 years or so – that’s meant in an entirely complimentary way. She hit every single note beautifully, but in sort of a rough, warbly, it’s-not-a-big-deal-if-I-don’t-hit-this-note voice.

The audience waited for well over half an hour before Django Django came on, but it was 100% worth it. The band seemed a little socially awkward, but it didn’t get in the way of the music and it was frankly adorable. They kept it very simple in that they got onstage, said hello, told us the song they were going to play, and then they played it. There was no crazy lighting, no special effects, and, most important of all, no overdone, mainly-fabricated “funny” stories that are bound to make an entrance in nightmares after the show. They didn’t need all that. They played their music, and they had fun, and that’s all. It was a bit difficult for either band to get the crowd hyped, but it wasn’t because the people in it were bored – they were relaxed. Some people at the show complained that they couldn’t understand what Vincent Neff (vocals and guitar) was saying, but others responded very well when he talked to the crowd. Maybe we Americans should just have cool people from the UK talk to us more often.

The part of the show that truly amazed the most was the percussion used by Django Django. They use a lot of unique sounds, and there were all the expected “fun” instruments; tambourines and maracas of all shapes and sizes, and even the occasional wood block doesn’t seem out of the ordinary at all. Howeve r, they had instruments most people haven’t seen since elementary school music class, instruments I’d never seen at all, and instruments I didn’t even know could be instruments. There was a contraption made from a high hat with maracas, then a tambourine, then a pile of shakers on top of one another. and these seemingly chaotic combinations of sounds were absolutely gorgeous. Tommy Grace (synthesizer) used an old paint can to play the intro to “WOR,” which they “closed” with before coming back for a satisfying encore. Altogether, neither Wild Belle nor Django Django had any super memorable stage antics, because they were completely unnecessary, they didn’t make a big deal out of themselves. They played their music, and put on a great show, and that’s all the crowd needed.