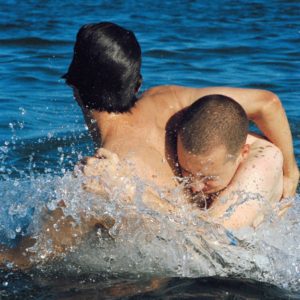 Music globalization is a beautiful thing. Visual artists, musicians, labels and everyone else associated put themselves out there on a world stage for all to see. Regardless of the scope, the consequences, however, are just the same; you make it or you fail. A major factor is it takes a certain awareness for image – a conscious approach of your own context, style and influences – for contemporary musicians to produce something novel, a massive feat nowadays, and when it occurs it is prevalent. The French electronic duo, Paradis, consisting of Simon Mény and Pierre Rousseau, tastefully have accomplished such a feat, merging French-pop lyricism to dynamic and attractive production as distinct as they are French, and they most certainly have not failed.

The most recent interview with the duo was conducted as a review of their artistry, describing their take, briefly, on imagery within their music. Translated roughly from French to English, the two explained how their visuals to a song sharpen the impression it leaves, a feature particularly appealing to them, and all leading to the eventual release of their debut album, Recto Verso. Described by the duo, “we have a very photographic approach, even in the clips. This is something we built progressively… something that will develop later… an approach that suits us very well.” The title track exemplifies this, with visual direction and assistance by the honorary third member Andrea Montano, featuring the musicians at their most fashionable amid the Mediterranean while filming a sensual display of androgynous affection.

The two’s awareness expands to their musicality even more so, dating as far back as their first release “Parfait Tirage” from 2011. Initially submitted for airtime on the popular radio show Beats In Space, the two were quickly picked up and signed. The extrapolation of this on Recto Verso fosters a deep and progressive house rhythm which is neither brash nor repeated. The pensive, subdued tone on songs like “Instanté” or “De Semaine En Semaine” speaks of emotions to a relatable degree but strays close with intensity to their influences of French lyricists Etienne Daho and Alain Chamfort with obvious resonation. The execution is flawless, cool and collected.

Older songs “Garde Le Pour Toi” and “Toi Et Moi” aided in the finalized track list for the debut release, bridging the lapse between their stream of singles to the present. The usual theme of love lost, and then remembered, on “Garde Le Pour Toi” is cinematically driven to the progressive instrumentation and reminds one of their own stream of consciousness. “Toi Et Moi”‘s more aggressive club sense, as helped depicted in the official video, is dramatic and mysterious, much like the duo’s presence and adds variance within the album’s repertoire.

Further, the two-part track “Miroir” (Un/Deux) offer the freshest Paradis production, like a pensive walk on a cool windy night, gradually intensifying but still smooth in Paradis-style, poetic and an apt homage to the aforementioned lyricists. These as well as the rest of the album evoke tenderness and suave-outlooks on life as a human in a world of personal interaction.

Recto Verso is deep, intricate, passionate and progressive. If it isn’t perceived as an excelling example of electronic production, then it should be remembered as lovable, lyrically. Paradis found their niche in the Mediterranean waters; they will wade there as long as their musical intricacies stay as sound as the current and their emotion never falls short.