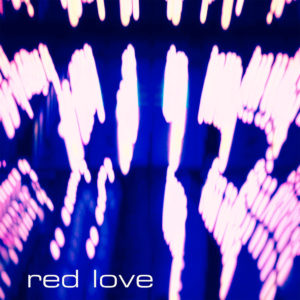 During the making of Bloc Party’s ingeniously named fourth album, Four, lead mate Matt Tong sought assistance. Best known for his production work for groups like Death Cab for Cutie and At The Drive-In, Alex Newport was brought on to help derive the growing and changing sound of Bloc Party. Along the way, the two’s collaboration blossomed and discussions were held for a new act. Much like the genesis of groups such as The Postal Service or Discovery, Red Love takes up the combined experiences and styles of Newport and Tong into their own act. The self-titled debut marks an interesting combo which the two thought to be explored, finding each other in Los Angeles to create a fresh new take on psychedelic rock that has flown entirely under the radar thus far

Red Love is reverb soaked psychedelic rock infused with the sound of 90’s era shoegaze. The guitars are hazy and distorted, but are left in the foreground of most songs in traditional shoegaze style. Guitars add texture to each song, using an array of different pedals and effects, noticeable on tracks “Sure as Day,” and layered with vocals which sound distant and muted. An echoing trail covers the tracks and  creates a strange sense of space throughout the album, establishing a consistently dreamy and bizarre atmosphere. The lyrical value is lost in the background mixing, but the ambiance is displayed and wandered through from one song to the next.

Red Love starts off with the particularly spacey track “Gone Tomorrow,” a repetitive instrumental jam featuring synthesized sounds over a guitar and drum baseline. When the lyrics finally start up in the second half the instrumentation explodes over each verse, settling into an apathetic rhythm for each chorus and setting the album’s tone.

Red Love really hits its stride with its featured single “Does it Make You.” A jazzy drum line and consistent guitar rhythms set the tone for the track, while the indifferent lyrics about the oversaturation of media drive home a poignant message. “Down to Dust” is a much more downtempo track that slowly builds energy as it goes. This song would be great as an alarm to gradually wake you up in the morning – an ill-fit in terms of energy to the rest of the album.

This disjointed feeling shows elsewhere at other times, such as the transition from “Does it Make You” to “Down to Dust.” Additionally, many of the tracks suffer from long runtimes – “Gone Tomorrow” could have easily been two full minutes shorter, and “Fully Reassured” drags on for over nine minutes long without any proper conclusion.

Overall I think Red Love is a decent first release without any sort of direction. It’s blend of psychedelic and shoegaze, both reflective and dreamy in style and theme. There are many paths Red Love could take with this project, and perhaps that just what they intended.No indications exist whether Red Love will be sticking around, considering Tong and Newport have many other projects and bands they are working with currently. Otherwise, the self-titled release showcases a collaborative effort between two skill sets and an exploration of a genre.