In my circle of friends back home, Cherry Glazerr’s performances always had quite a bit of a reputation. From opening for The Flaming Lips to finally headlining their own shows, the ever-evolving L.A. based band, headed by Clementine Creevy, was known for harsh, eccentric performances, and I was excited to see if this held true as I walked into Deep Ellum Art Co. for the first time. Though doors opened at eight, it was about an hour and a half before anyone got on stage, and the crowd trickled in little by little to form a decent sized audience in the small venue by the time the opener walked on stage. Being Dead, an Austin based band, greeted the restless audience with a soft “Hey y’all,” before launching into the surprisingly soothing harmonies of their first song. They quickly hyped up the audience, alternating between hard hitting drum beats and soothing vocal harmonies, interspersed with harsh shrieks and banjo-like guitars. They were also super friendly with the audience, smiling between songs and introducing each of them in a thick southern drawl. By the end of their set, they left the stage with plenty of whoops and hollers from the audience. Quite a while later, Cherry Glazerr took the stage. The band seems to have returned to just a guitar-bass-drums combo, as there was no synth player to replace Sasami after she left. The bass player was also a different person than is portrayed with the band’s most recent promotions. I didn’t question it much: Cherry Glazerr’s rotating cast of members is hardly surprising, even if it was just for this one set. The band immediately launched into their new music, starting the show off with “Ohio” from their latest album, “Stuffed and Ready.” They didn’t just stick with the new stuff, however; instead, they decided to alternate between their new songs and old favorites, going straight into “Had Ten Dollaz” after their intro. As they continued, the fans also grew in fervor, seemingly becoming more and more energized after every song. A mosh pit formed not long after the band started playing, driving less dedicated fans from front of the audience. Several times both Creevy and her bass player had to tell the fans to back away from the stage, as they were being pushed against the stage. This didn’t stop Creevy from giving an intimate performance though; she managed to get atop the tables at the edge of the stage several times to make contact with audience, once even jumping into the mosh pit to the delight of her fans. Perhaps she took inspiration from them: more than once did a teenage girl crowdsurf through the mosh pit during different parts of the night. The high energy continued without stop right up to the very end and Cherry Glazerr ended their set with fans, including me, clamoring for more.

Cherry Glazerr didn’t have the harsh eccentricity that I had heard so much about, but it was a wonderful performance nonetheless. The change of performance style reflects the tone change from her last album to the newest one: one that is more personal and introspective, and one that the audience really received well. 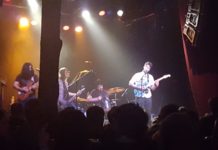