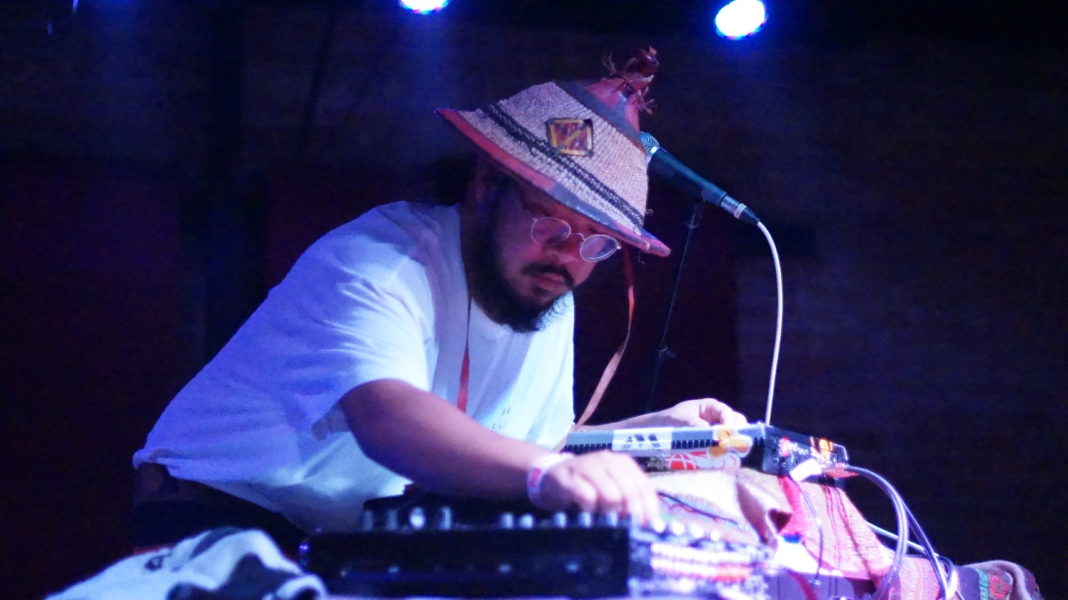 After a characteristically hot Texas day, a diverse and friendly crowd slowly filed into RBC. The crowd had weathered intense heat, pouring rain, and a slight show time change. They didn’t let any external factors deter them from seeing this very solid lineup.

Metaphysic 基本原理 took to the stage first playing a bass heavy glitch set. Having recently reached total plays 25,000 plays on his Soundcloud after putting out an EP in April, Metaphysic 基本原理 is still fairly new. However, Metaphysic 基本原理 did not let being an up-and-coming artist stop him from performing a very put together set. His set was more electronic that the acts that followed him which allowed him to stand out with his very complex and layered soundscapes that he skilfully weaved together with his laptop and controller. He would interject his set to check in on his audience, and it was very evident that he was grateful and psyched to be performing.

From the way that fushou. approached the stage and his performance, it seemed evident that he had more experience performing. His set was more in line with the music Mndsgn had earlier on in his career. Opting to us an SP-404SX for his set, fushou. created a more laid-back performance that used gritty textures. His set was more boom-bap oriented, but with some more earthy sounds and wonky beats. Working proficiently within the confines of the SP-404SX, it’s limitations did hinder his set in some ways. Because of the limitations of his gear, fushou. was limited to a certain set of FX that are usable in the setting he was performing in, and transitioning between tracks did seem more rough since they take a lot of planning on the 404. However, the pauses that fushou. put throughout his set allowed for each idea to breathe and allowed them to sink in with each new work. As his set progressed, the crowd slowly started to grow as midnight approached in anticipation of the legendary headliner.

As Mndsgn casually sauntered onto the stage, the crowd lit up with excitement as it was his first time performing in Dallas. This performance was set up in his usual solo set, using the SP-555 to conduct his performance, a mixer mainly for its FXs, and a vocal effects processor to add to his silky vocals. Oscillating between lush and spacey soundscapes to heavily swung beats, Mndsgn was able to craft a set that ebbed and flowed with his audience.

Opening with a modified version of “Overture” from his most recent album, Body Wash, Mndsgn expertly weaved in and out of some his favorite songs to some of his own choice tracks throughout his set seamlessly due to his insane amount of experience and knowledge. Interjecting nods to legends such as Prodigy (R.I.P.), J Dilla, and A Tribe Called Quest, Mndsgn also played some music from newer artist that peaked his interest, such as Joyce Wrice and his friend Knxwledge.

He mostly played tracks off of Body Wash, but also included some songs from Yawn, both to much excitement from the crowd. Some notable tracks that in particularly were well received were “Cosmic Perspective”, “Where Ever U R”, “Searchin I (4 That Familiar Feelin)”, “Guess It’s All Over”, and “Camel Blues”. After deciding to add another song after his original closer, “Guess It’s All Over”, Mndsgn teased “Suede” by his friends Nxworries, consisting of Anderson .Paak and Knxwledge, and let it ride as the crowd erupted, concluding a wonderful evening.