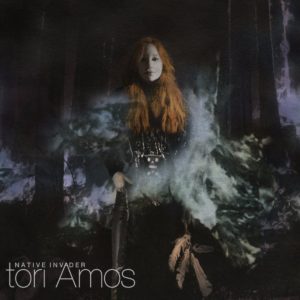 Tori Amos had her biggest break back in 1992 with her debut album Little Earthquakes. The album roused the public with lyrics of rape, religious background, and sexual matters. Now, Amos releases her 15th studio album Native Invader, still packed with controversial topics. This time, her message relates to the modern issues of the world: the Middle East, global warming, religious motifs, and more. Though it has been 25 years since her first studio album, her sound remains just as raw, diverging, and vintage.

Her first released single “Cloud Riders” immediately reveals dark and spiritual themes. Amos states she has been touched by “rhythm demos,” “the guitar preacher,” and “by the Holy Ghost.” Despite the vulnerable situation she describes, hope is what drives the song. The chorus blasts out with rising guitar arpeggios and a sweet melody, backed by ringing organs. Throughout the piece, the drum beats are reminiscent of Amos’s characteristic 90s vibe that seems to always stay with each of her albums.

“Up the Creek” is one of the more erratic songs of the new album. Still, Amos manages to incorporate various instruments together into a fitting sound. The track starts off with a rock folk guitar and melody. Once the verse starts, the other instruments enter: bouncing violins, a jumping piano, knee-slapping beat, and a crying crunchy guitar. The lyrics are very telling of the destructive events happening in the Middle East: “If the Militia of the mind/ Arm against those climate bind” and singing to the “Desert Sisters.” Amos urges that this is the time everyone must stand together as one. She refers to the people in the world as the same: “every girl in every band/ Every cosmic cowboy in every land.” She describes if the “Good Lord” is by their united side, then humankind will survive. There should be no division in a time where hope is limited.

The entirety of the album has gritty, saloon-esque vibes especially with the instrumentation: twangy guitars, raw beats, entertaining pianos. Alongside the western feel, there are many tracks that are slow, piano ballads. Amos’s melodies are heavy on the downbeats, pulling and pushing in a familiar way. In some tracks, her melodies can even be described as borderline hymn-like. Comparing to her previous works, it is arguable that Amos’s voice is less aggressive and sarcastic than before. She sounds more authoritative, melodic, and collected.

There are random guitar solos that are resonant of the era. One of the most telling aspects that are frequently used is the spinning rock/hip-hop beat reminiscent of twenty years ago. Though the Native Invader has a continuous theme, it is safe to say that each track is distinct from each other, lyrically and musically. The scope of how likeable Amos’s newest work is definitely subjective. Some might say this album draws on the “cheesier” aspects of the 90s: rock songs that are easily forgotten. On the other hand, if one truly enjoys the throwback atmosphere of 90s western country-grunge, then this is a diamond in the rough.

Listeners can appreciate Amos’s staple erratic musicianship and the poetic worldly lyrics. For this being the 15th studio album, Native Invader achieves something that long-standing artists find it hard to maintain. Though her sound is cleaner and more composed, listeners can still hear Amos’s original sound in her musicianship.