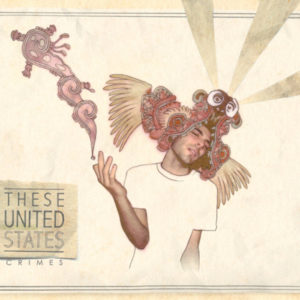 I think many people expect album reviews to begin with a tone of
decisiveness. I either like it or I do not, and that should be
portrayed to the reader early on. Having never listened to These
United States before, I feel that you should get my feelings just as I
had them when I began listening to their new album, “Crimes”.

Initially, I was not very impressed, taking their southern rock feel
to be insincere and contrived. As I got deeper into the record, I
found that that feeling was just one aspect to their sound. They
blend the likes of folk, garage rock, and even pop with southern rock
to create a very unique overall sound.

With the opening song, “West Won”, These United States begin their
exploration of the antagonist and the not-so-moral soul, a recurrent
theme throughout the album. The song speaks of Cain, the first
murderer in the Bible and the Quran, and of Dionysus, the god of
madness. The turning point for me was the narrative tale of Samuel
Clemens, Lovely Lucy, and Little Jon on the track “Honor Amongst
Thieves”. The track has an infectious melody complete with great
honky-tonk style steel guitar.

From here on out, I was convinced that this band was completely
genuine in their style. Even the early songs that I was unsure of are
ones that I would recommend, especially the song of great
alliteration, ” Susie At The Seashore.” Other recommendations
include “Heaven Can Wait” and the final sing-a-long of the album,
“When You’re Traveling At The Speed Of Light.”

These United States have produced a very American record with
“Crimes”, which is very fitting for their blend of musical styles,
name, and home in Washington D.C. Now that I have listened to the
album in its entirety, I can decisively say that I would recommend
this album. I think almost anyone can get behind the twangy, rock and
roll sound called These United States.