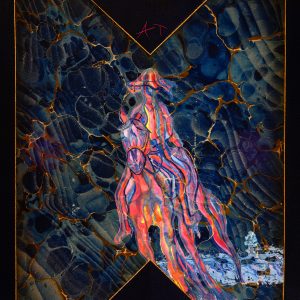 It’s been a rough lil time for our friend David. He went off and started a band with his pal Noah, and everyone loved them! Until their biggest album yet came out, and Noah started hogging the spotlight. Distraught, David went out on his own and made his own album all by himself. But no one liked it! Poor David. So then he decided to get back with his old band and lead the way with his fun wild voice, and make a new album. But no one liked it still! Poor David! He then tried to make a new band with some other friends from other bands and make an album with them. But no one liked that one either! POOR DAVID!

No but really, Avey Tare’s solo career hasn’t been the smoothest. Sometimes it feels like people only like Animal Collective for Panda Bear, which is a shame, because some of the game-changing psychedelic group’s best songs would not be possible without Avey’s imaginative insight. The two boys’ songwriting styles are different to be sure, but both are essential to the AnCo dynamic.

It’s in that necessity that the solo careers are prone to falter. Panda Bear has certainly fared better over the years, with at least three excellent solo albums under his belt (Tomboy is not one of them). But it’s Mr. David Portner who has really suffered at the hand of the critics. Despite in some cases being even more adventurous than his bandmates, he’s yet to garner anything more than lukewarm reception for his solo work. I’ve been a bit more forgiving myself—I recently revisited his album as Avey Tare’s Slasher Flicks and it’s actually way more of a blast than I remember—but even I’ll admit that I don’t find myself returning to records like Eucalyptus and Down There as much as an album like Person Pitch.

I was hoping that would change with Cows on Hourglass Pond, and only time will tell, but I think this one has some things going for it that previous efforts lacked. Cows attempts to streamline and compress Avey’s keen penchant for psychedelic, effect-heavy folk music, and I’ve found it more successful than Eucalyptus in both its tighter length and its smoother, more robust production. David Portner has led up to the culmination of this sound, both with his last record and with the highly underrated Animal Collective EP Meeting of The Waters, and we can catch whiffs of both of those releases in Avey’s wondrous, cycling guitar loops and trippy, vaguely tropical splashes of noise.

Lyrically, Cows ruminates on…odd trappings. Lemonade, eyes, bubbles, dogs, weekends, friends, and horses are all touched upon, and it’s unsure how clear Avey intends the listener to grasp the overall story. Perhaps it’s just aimless wandering, but it’s a surprising fit, nestled inside similarly curious and explorative instrumentals. It sounds like a trip through nature, and a much more cohesive one than in previous incarnations of Avey’s particular brand of folk. Instead of a perpetual wade through an endless ocean, it feels like a healthy hike from one corner of the forest to the other.

Portner, all these years later, still can’t help but fall into his bandmate’s shadow, unfortunately. With the release of Panda Bear’s Buoys no more than two months ago, comparisons are destined to arise. More than ever, it seems that Avey Tare takes several cues from his musical compatriot, with some choruses (“Nostalgia In Lemonade”, “Remember Mayan”) reaching into a near-falsetto croon drenched in reverb, reminiscent of Panda Bear’s typically far-reaching melodies. Certainly Avey’s production seizes the throne this time around, though the vocals could use a little punch-up; a common itch with AnCo solo works is the insistence on pushing the vocals to the backseat, which is what made Buoys such a refreshing change.

Ultimately, Cows on Hourglass Pond is far from a masterpiece, and I don’t think Avey Tare meant for it to be. He’s a musical spelunker, and his latest effort just happens to be the most tenacious collection of his findings. It’s the result of years of sonic excavation that reads more as a colorful backdrop than a show-stopping centerpiece. I imagine this record as an ambient accompaniment to the outdoors, or like a giant aquarium that extends from ceiling to floor that we get to admire from the outside. While not as bombastic or enduring as we’ve seen Avey Tare can be (I’d even refer back to the Slasher Flicks record for that), it’s still a joy to listen to.