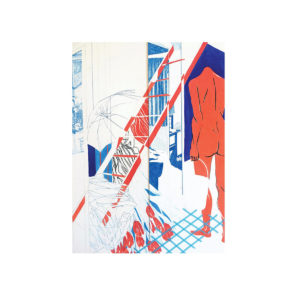 A short collection of six tracks, Shadow Expert is Palm’s latest EP. Palm is a small band from Philadelphia consisting of four members that is gaining attention for their vast experimentation. They employ eccentric rhythms and odd time signatures to create a chaotic, whimsical sound.

Palm often gets compared to Animal Collective, especially their early days. Their songs contain many elements of math rock, primarily the odd time signatures that change throughout the songs progression. Despite being only four members, their sound is very vast, as each player is playing something interesting on their own.

Their songs take very sudden turns. It sounds like different sections of songs have been cut and paste together, creating a mosaic of different sounds with little to no transition. Segments will be looped repeatedly before changing to a different looping pattern, and then back again. Off-key notes will also randomly be thrown into the mix, creating even more dissent. In theory, none of this should work, and it’s all very jarring at first, but it’s so satisfying to listen to once you grasp what they are doing.

Vocals are not Palm’s focus, but they still add another layer of complexity and musicality to their tracks.  It’s hard to understand exactly what they’re saying because the vocals are quiet, and their words are sort of mumbled, but they add an almost dreamy element to their songs.

It’s great to see a small band do something so unique, and doing it very well. Although this EP is short, it shows a lot of the characteristics of their music, and what sets them apart from other bands. It’s not a complete project, as their next LP will be coming sometime soon, but it’s a nice taste of Palm’s distinctive sound.