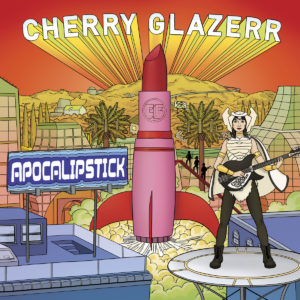 This roaring rock band has returned with their latest album, Apocalipstick, with new producers, a new label and two thirds of a new band to create an album full of 90’s inspired indie rock and lighthearted commentary on social issues. Clementine Creevy, the 19 year old creator and figurehead of the band, started dreaming up Cherry Glazerr in 2013 and got her break with a record deal of their first album, Haxel Princess, and performance at SXSW in 2014. Apocalipstick is a more developed, focused expansion of Cherry Glazerr’s previously eclectically punk rock and alternative style that had songs ranging in subject manner from grilled cheese to dead dogs.

The first track of Apocalipstick, “Told You I’d Be With The Guys” introduces the album with a compelling electric guitar melody, a common element throughout all the songs. Then Clementine calls out in her Joan Jettesque voice for women to look out for each other and help a sister out, exploring her feminist ideals in the album’s opener. The same high energy is carried into “Trash People,” and there is some interesting and enjoyable tempo and melody changes that distinguishes this song as a highlight of the album. The message of this song is more cheeky, relating to how filthily the band lives at times. Another stand out was “Nuclear Bomb,” which built from a soft, lyrical beginning to a full fledged ending and played with dynamics within, showcasing Clementine’s tender voice and made it one of the most emotional tracks on the album.

The rest of the album is pleasant, but in the vein of the same heavy guitar sound and angsty rock which was not as inspiring or noteworthy as the songs previously mentioned. However, the album had redeeming qualities with the catchy melody of “Lucid Dreams” with rhythmic repetition and prominent guitar that overlapped and copied the voices` melody. Also, they comment on social media narcissism in “Instagratification” with lyrics that refer to the compulsion of people to present themselves in a superficially good-looking way, and then criticize others for doing the same. Lastly, their ending track of “Apocalipstick” was interesting in that it is entirely instrumental and mimics the ending of a rock concert in which the band is beating away at their instruments as they wind down to a close.

Overall, Apocalipstick is less experimental and raw than Cherry Glazerr’s previous music in which they had varied from punk rock to slower, alternative compositions, but their sound has become more refined and collected, a blessing for some of their new songs, but this also left a few on this album feeling stagnant.