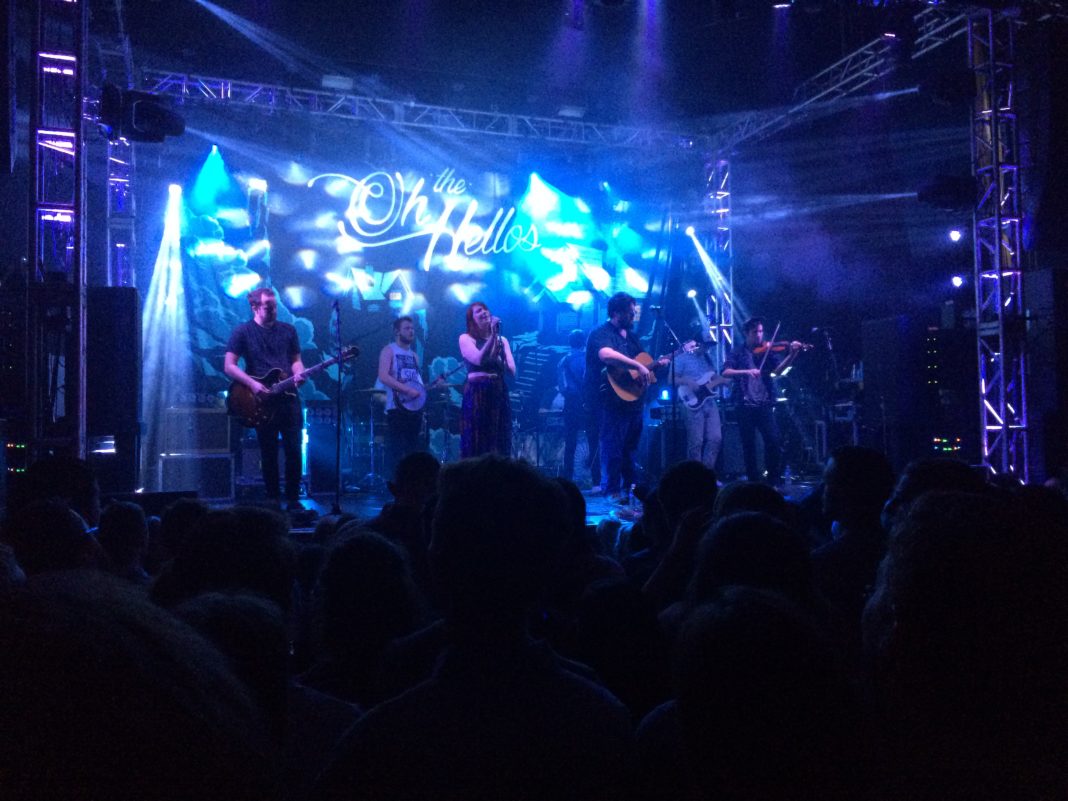 On Saturday night, the Oh Hellos played one of the best shows I have ever seen to a sold out crowd at the Granada Theater. Even before the band took the stage, their energy and love could be felt in the line stretching down the sidewalk, beginning two hours before the doors opened. From the way the well-dressed crowd mingled, it felt like everyone knew everyone else.

The Fox and the Bird opened with a variety of Americana-style songs, including a song in Spanish performed by the pregnant female singer and her husband, the upright bass player. The most notable moment from their performance came in the first song. Three of the five members took the stage at the beginning and started up a song, then halfway through, the remaining two members surprised everyone with a trumpet solo from the upper seating area. When they finished, they ran through the smiling crowd to join the rest of the band up on stage. When their set ended, an exciting anticipatory buzz filled the room. At 9:20, the time the Oh Hellos were scheduled to begin, a cheer went up, but it wasn’t until about ten minutes later that the screen shielding the stage rose and everyone lost it. The nine band members filed onto stage one by one until they filled all the available space. We didn’t stop cheering until they began their set with the intro and first song off their latest album, Dear Wormwood.

The band is fronted by Tyler, a big, friendly guy who couldn’t hide his disbelief at the love radiating from the crowd, and his sister Maggie, who sang and danced barefoot throughout the show. The seven other members of the touring band danced with Maggie and, between them all, played two electric guitars, two drum sets, an electric bass, banjo, accordion, and violin. All of this came together to create a full sound that goes beyond their studio recordings. It’s one thing to stream the digital version of “Exeunt” sing “I have set my mind and my will, I am leaving” and another to hear the entire band belt it as they grip their instruments with white knuckles and swing them around, opening their mouths wide, contorting their faces to yell the line at the top of their voices.

The set moved from up-tempo with a strong beat from the combination of drums to slower, reflective songs and back to up-tempo, much like the progression of their two full length albums constructed to follow a story arc.  During the beginning and endings, the band members would not stand still. The drummer on stage right stood the entire time, head banging as his arms swung. The banjo player strummed mercilessly and bounded across the stage in his bare feet. The violinist and mustachioed electric guitarist took turns yelling into a microphone and jumping in beat. When the songs slowed, the crowd’s singing could be heard in perfect harmony with the band as everyone swayed. During a part of “Dear Wormwood,” the band quieted for Tyler to sing and play solo. The room was silent for the duration – some people actually shushed others to preserve the moment – but then the song burst into energy again and everyone resumed jumping and dancing. Before the last song finished, we could all feel the chant for one more song, which started soon after they left the stage. To our excitement, Tyler and Maggie took the stage to sing a quiet duet. Those who knew the words sang along while those who didn’t watched in quiet admiration. To finish it all off, the full band took the stage again – including one of the guitarists with a Texas flag tied around his neck. They played one more song complete with the banjo player scaling the lighting structure on stage right to yell out the song’s lyrics while twenty feet above our heads. When the lights went down, the crowd was immediately buzzing with joy and astonishment. You could see the consensus on everyone’s smile: we will remember this show.