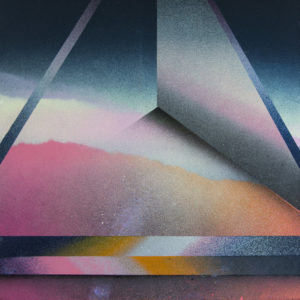 It has been three years since Brad Weber, the mastermind” behind Pick a Piper, has released a solo project. The tour drummer for Caribou took to this album to allow his audience to connect his music and personal encounters with life. Although staying with his very organic, 80’s synth sound that was seen in his previous solo release Pick A Piper, his latest release Distance is more grounded and fluid as it is personal, showing his growth as a person and as an artist.

The album opener “Geographically Opposed” is a track that happened by accident when an email was accidentally sent to him by NZ friend, Bevan Smith (stage name Introverted Suns). Weber sent him back the vocals with two mixed tracks and the mix sounded so good it was decided to be kept. This serendipitous moment resulted in the two collaborating on more tracks and ultimately the rest of his album. The title, and how fast paced it is, is definitely a testament to his nomadic existence for majority of the year. The first album is more 2013 Weber, but as the album transitions to the second track “Further and Further” segwaying, into what the producer’s current sound development is as this track has more dream pop influences with very soprano airy vocals. Letting the listener in on how much more intimate this album is. This song being more congruent with the tracks in his 2015 EP collaboration with Squalloscope and Love Cult: Pick a Piper/ Squalloscop /Love Cult.

Weber maintains his geometric style by cycling through two alternating beats (upscale and downscale), and layer on top of those, but the simple percussion still remaining an important aspect of the track even as there are a lot of samplings layered. “Nikko” a song about a town in Japan is one that shows his sturdier version of his still busy 80’s synth pop style with its constant baseline. A track that, sounds very Tron: Legacy riding on a space scooter through flashing lights esque continues to make that audience feel the sense of moving through space.

His album featured three tracks that combined being personal and a transition in his sound design.  “Still Awake”  another track featuring the song about the sleep paralysis he’s been struggling with since he was 18.  A more eerie track with the opening line “As this demon, floats over me” describing this inner turmoil he battles as he navigates through life. As the word “dream” repeats the song picks up and becomes more upbeat symbolizing either the rise of more struggle as he persists or hope as he continues this journey or both. “Three Years Today,” a song about connections gained along the way and struggling to maintain certain relationships, and “January Feels Lost,” are along the tracks of more intimate songs. These songs include a new aspect to his music -jazz- featuring a muffled saxophone which bring forth a sense of lost space and distortion of time.

His final track, “Bathed in Light” is the most revealing, and experimental of his tracks. More existential and conscious than ever as it features very heavy on echoing breathy vocals making the track a hauntingly spiritual experience. Weber mentions how he let the songs with vocals more speak as they are and not force their integration into what he believes the vision is (source: Circuit Sweet) . His adjustment of style at times felt a bit abrupt (transition from “Night Owl” to “Flood of My Eyes”) but can be used as a metaphor for the unpredictability of travel. The tracks open the album up more forcing the listener abstain from getting lost in the instrumentals but think about the relevance of what each vocal track as to offer. “Bathed in Light”, a track that is the complete opposite of the opener, did the best out of the tracks at doing this, resulting in a feeling of a sense of peace.

Cycling upbeat 80’s inspired electronic synthesizer inspired songs with more exotic beats, songs with airy repetitive vocals circled in varying sounds of different repeating beats, introducing new jazz textures, and weighing heavy on the reverb in some tracks Weber was able to take the audience on a journey that managed to describe a variety of experiences in its 39 minutes. Pick a Piper manages to keep everything together as a percussionist as a simple meter is the core allowing a maintenance of fluidity through varying styles. From his former album, we know Weber is capable of producing complex rhythms, showing that his simplicity wasn’t due to lack of experience but purposeful in conveying his message. Developing his vocal tracks from shoegaze to dreamy, while continuing to explore geometric sounds, Weber manages to show the toll that time and space has taken on him, but the eventual peace he managed to reach in his life as a sojourner.

Slipknot – The End, So Far