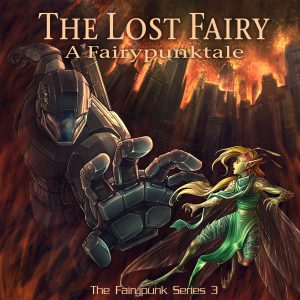 On August 25, Paul Shapera held a premiere listening party for his newest album, The Lost Fairy, a Fairypunk Fairytale. This live-stream, which was hosted on his youtube channel, was a rather intimate affair. I was lucky enough to make it to this party, and we were about 120 people strong across the world. Excitement was at an all-time high, as we were eager to finally hear the conclusion to Paul’s latest trilogy. If only we knew it would include more closure than we were ready for.

The Lost Fairy is a continuation of the Fairytale Trilogy, narrated by Han-Mi (Psyche Chimera), taking place soon after the events of The Broken Cyborg, a Biopunk Fairytale. The story narrates the escape of the last living fairy of the city of Avalon, being hunted down by one of the soldiers responsible for her city’s destruction. She soon encounters Jane from The Broken Cyborg, and she assures her she’ll get them both to safety. Meanwhile, Jane’s home in the city of New Albion prepares to fight against the same impending warfare that Avalon was decimated by.

At first glance, it looks like Paul created his own fairy language to have gibberish be the shield for listeners to not see plot elements coming before they should. Turns out, the track names are just Caesar-Ciphered.

In The Broken Cyborg, Paul’s musical creations brought distinction and depth to the various settings his characters traveled through. In The Lost Fairy, the music shines in it’s ability to express emotion, intensity, and actions across the entire cast. It’s like each character has a musical aura about them, be it the fairy’s (Lauren Osborn) helium-sounding altered voice or that they Mayor’s (Vivian Moonic) songs make it feel like you fell down a manhole into a twisted Betty Boop cartoon. If you loved the Shanty Town/Xandoria songs in The Broken Cyborg, you’ll love how the community has changed in “Sheijmdh.”

Unlike when I covered The Broken Cyborg, I’m not going to go into full plot discussion. It’s been out for a bit, but there’s still elements within in I still must process to get a better grasp on New Albion, post-humans, and the relation between gods and souls. Also, I really encourage listening to this narrative in its entirety, but preferably after listening to The Broken Cyborg to understand the character of Jane and her actions thereof. If you haven’t listened to the Lost Hollow Trilogy, that would be beneficial as well, or at the very least read up on the characters and events of it. What I will say about The Lost Fairy, a Fairypunk Fairytale is that it’s got a very abrupt end. A resolution of sorts, the lead narrator accepts that her story is finished and reminisces on times that should have been. During the live-stream, I was 100% sure Paul was tricking us when a “The End” title card appeared on the live-stream and the sound stopped. But it wasn’t a trick, and that was truly the final curtain for Han-Mi’s Fairypunk tale.