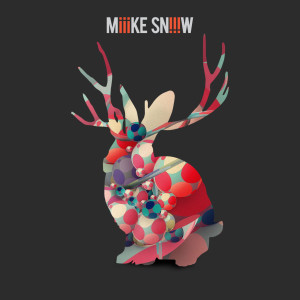 Miike Snow has made a reputation of its ”indie pop” fanbase, thanks to the band’s debut self-titled album from 2009, which arguably shadows over the band’s sophomore record Happy To You. However, after releasing teases of the album including the sexy track “Genghis Khan”, Miike Snow gives the greatly anticipated iii – the junior record of the Swedish trio. Miike Snow starts off the album with “My Trigger”, setting the theme of the album; the first half of iii is packed with sexual themes – lyrically and musically. “My Trigger” and “Genghis Khan” – which is arguably the most popular track of the record – leads the album with catchy pop-like melodies and 1970s type vibes. The band’s staple falsetto vocals slide into the audience’s ears with provocative lines: “baby let’s forget the morning… you got me gunning/ pull my trigger”. Note: The 1970s funk remnants may remind the audience to Daft Punk’s latest visit to the era Random Access Memories.

“The Heart of Me” introduces the electronic-synth premise of iii. The track’s electronic choir introduction leads the audience into a buzzed videogame-like setting, borrowing a Foster the People-type piano chord progression – which appears multiple times in the album like in the tracks “Lonely Life” and “Over and Over” – and Neon Indian “Polish Girl”-era vibes. Again, the track relates suggestively with lines “I want to touch you; I want you to touch me”, but keeps the subject provocatively ambiguous with poetic verses: “dip into the lake, the mountains shake”. The catchy, pop tune introduces auto tune to the vocals in the bridge, a motif that appears again in the album.

A major aspect of iii is the band’s step back into the 1960s/1970s musically. In tracks like “Heart is Full” and “Back of the Car”, Miike Snow fills the tracks with sultry jazz horn choirs, soulful piano riffs – even dancing with a powerful piano bass line reminiscent of Screaming Jay Hawkins’ “I Put A Spell On You”, exemplified in the track “Back of The Car” – and beautiful string ensembles. These tracks scream – or is croon a better word – soul; “Heart is Full” skillfully samples Etta James’s powerful vocals from her song “Waiting for Charlie to Come Home”. “Longshot (7 Nights)” borrows from the era as well, but rather the sultry side of the time, the romantic one; beautiful strings lead the track with pentatonic tones, lending the listener a classic-1960s-trip-to-Shanghai-vibe. The classic drum beat drives the listener in a romantic melt, as Miike Snow caresses them with the dulce melody.

The tracks that stand out the most, but perhaps not in the best way, are “For U (feat. Charli XCX)”, “I Feel the Weight”, and “Over and Over”. “For U” borrows heavily from Discovery – which is the side project of Vampire Weekend’s Rostam – with its scattered, arpeggio keyboard blips. The verse consists of a crooning vocal, and the chorus has Charli XCX singing a simple melody reminiscent of a nursery rhyme. “I Feel The Weight” is basically a ballad fresh out of the 1980s, with its simple, ascending chord progression and a high voiced accompanied “riff”. The vocals are heavily altered by technology to a deep, deep voice. The track is the twin brother of Frankie Cosmo’s “O Contest Winner”.

“Over and Over” starts off with a sexy electric guitar riff reminiscent of the Black Keys. However, the vocals come in with a Marilyn Manson type of register, equipped with a matching melody. The Foster the People type of piano comes back in the chorus, accompanying a tiring vocal tune. Yet, the cool part of the track is the transition: the electric guitar riff and vocals overlap and dance very nicely. The bridge also brings a new moody, dark setting, armed with electric guitar and synth blipping- just like in a robot rave. iii is sexy and catchy, fortified with fresh electronic motifs and powerful flashes of the past. The album’s borrowing of many of today’s artists bring a new perspective to the band’s new sound and will definitely take the audience off the band’s 2009 “Animal” bandwagon and into the 2016 iii space-rocket.