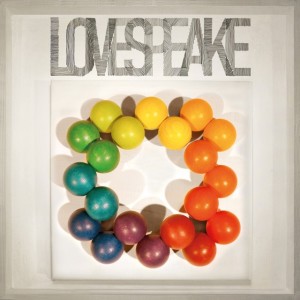 The Norwegian band Lovespeake’s new album DNA can be described in two words: love-speak. DNA is saturated with late 1970s, early 1980s influence, making the record the perfect soundtrack to many atmospheres, from a sensual dinner next to the firelight to a fun disco night with your boo. Lovespeake seems to have borrowed inspiration from artists spanning from the Bee Gees to Stevie Wonder to Michael Jackson. If soul funk and R&B had a baby, DNA would be it’s pop-raised offspring. Complete with fresh electric guitar riffs, groovy bass lines, funky keyboard-synth electronica, and vocal harmonies fit for bell-bottoms and sunglasses at night, DNA is definitely a fun and sexy record, just in time for summer.

The record starts off with strength, exemplified by the opening tracks DNA and Tightrope. These tracks set disco-type mood with Stevie Wonder influenced bass lines and falsetto refrains. The vocals in Tightrope entice with a “Sometimes I never know (never know)/ how high this gotta go” in a syncopated melody, seemingly coaxing the audience to test this limit through dance. The electric guitar riffs used in the record is reminiscent of the 1975’s guitar, like sisters (maybe twins), exemplified in the track Everyday Electric. The track Dreamer could be taken straight out of a 1980s radio station, with its pop-fueled melody and bubbly electro-synth arpeggios. Dreamer borrows from a tropical place, giving a Caribbean feel interlaced between the keyboard parts.

The star tracks of the album have to be “Sundive” and “U”. Sundive is that song you learn to play for your boo’s birthday, comparing your beloved to the beautiful summer. The funky guitar riff play with the groovy bass line to give the falsetto chorus the hard hitting feeling of love, while the cool cat keyboard solo seals that certain deal soul funk always promises. “U” has a sexy R&B drum beat that almost seems a little bit trap-beat like. With that being said, the sexy bass line follows, creating a sensual night fit for an amorous firelight. The falsetto chorus forces your hips to roll to the waves of soul, and takes you back to one of music’s best eras.

DNA is this summer’s groove record, perfect for those hot nights made for romance, soaked with 70s soul, sweet as molasses. The arrangements of the record are crafted so perfectly that soon enough, eBay searches for vintage platform shoes will skyrocket. DNA is the perfect tribute to this funky time past, and perfect for loving time now.