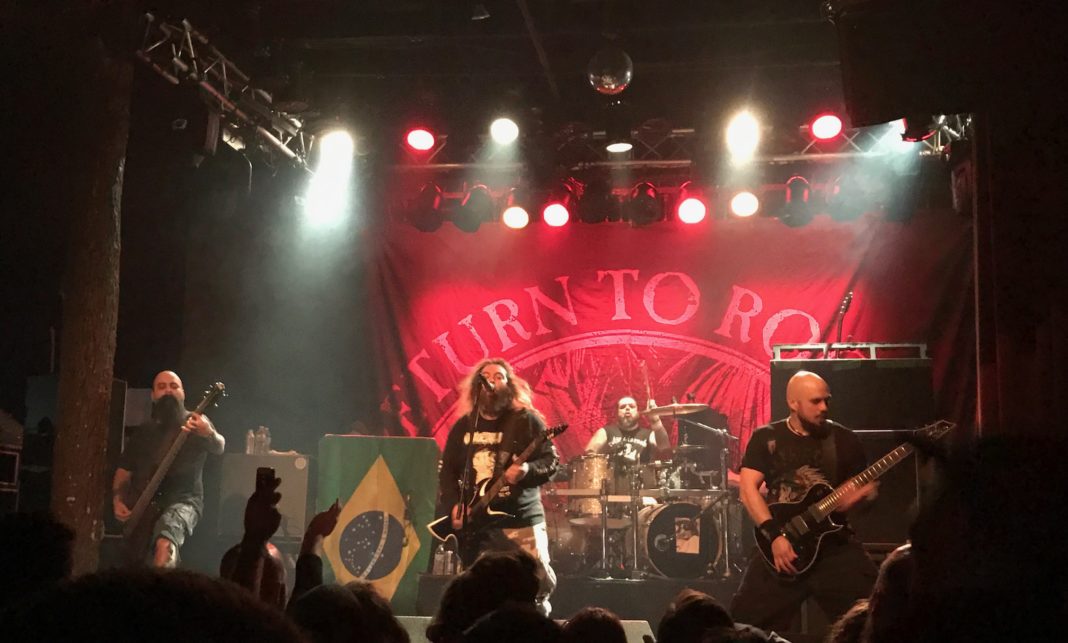 Ex-Sepultura founding members Max and Iggor Cavalera arrived in Dallas on Valentine’s Day to revive their divisive 1996 album Roots. Perhaps the only album associated with nu-metal that metalheads aren’t embarrassed to admit they enjoy, Roots remains a successful album 20 years later by doubling down on the heaviest ingredients of nu-metal and effectively combining it with a diverse mix of Brazilian (the brothers’ country of origin) instrumentation. Also, it helps that the band mercifully eschewed the whiny, adolescent elements of the genre commonly found in bands like Korn and Slipknot. The performance of such a singular album in combination with an impressive opening lineup undoubtedly promised a killer night of metal at Deep Ellum’s alternative venue Trees.

The night started off with two sets from local metal bands. First, Bad Blood took the stage with angsty groove metal. Next was The Crimson Veil whose energetic set was reminiscent of the light death metal popularized by Slipknot.

The third performance of the night was from grindcore wizards Full of Hell. After some mood setting distortion, the band quickly ripped into their blistering sonic assaults like a force of nature. While the group was bathed in red light, they would punctuate their blisteringly fast tracks with harsh noise and vocal samples (including a wonderful Werner Herzog quote). The heart of the band was definitely lead vocalist Dylan Walker who skillfully transitioned between guttural roars and high pitched screeches with phenomenal agility. The most impressive aspect of the set came from drummer Dave Bland who played like a skilled jazz drummer that just took a hit of a particularly effective strain of cocaine.

The penultimate set was provided by the technical death metal titans Immolation. The nearly 30 year old band displayed an immense amount of instrumental prowess throughout their set. Frontman Ross Dolan (who uncannily resembles a metal version of Tommy Wiseau) along with guitarist Robert Vigna were the stars of the show and consistently played with equal parts finesse and aggression. They played several tracks off of their newest record Atonement that fit in perfectly with their beloved material like “Majesty and Decay” and “Immolation.” Surprisingly, the best song of the set ended up being a new track, “Fostering The Divide,” which the band played with an infectious level of ferocity.

After a prolonged lull in between sets, Max, Iggor, and their touring band (guitarist Marc Rizzo and bassist Johny Chow) finally took the stage. The set began with Roots’ classic opener “Roots Bloody Roots.” The fan favorite track immediately caused the crowd to press towards the front of the stage. The audience obviously loved the material being played and passionately sang, danced, and moshed along to every song. Max Cavalera effectively kept the crowed hyped throughout the entire set by encouraging the audience to participate in the music by chanting or yelling along.

The atmosphere was relaxed and playful with the band clearly enjoying themselves while playing their old material. The most entertaining section of the evening had the drummers from Immolation and Full of Hell return to the stage and start a drum circle with Max and Iggor. While on paper that may sound a bit ridiculous, the intensity of these skilled drummers’ rhythms were incredible.

Once the band completed the entirety of the album, they left the stage for an extremely short amount of time before coming back for an encore. The band went on to play a Celtic Frost cover, a second rendition of “Roots Bloody Roots,” a straightforward cover of “Ace of Spades,” and a mixture of their classic thrash material. As the evening came to a close, both the audience and the band were unmistakably pleased with the nostalgic performance.