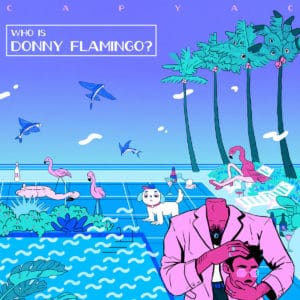 Who Is Donny Flamingo? is an EP release which continues elements from prior works such as their 2016 debut or last year’s Fis, but really strays close to already-thought ideas with a few exceptions, scratching up against the intersection of dance, funk and pop. Donny Flamingo is noted to be a character in mind that Capyac’s music can speak for, “a curious character that is difficult to define, a complex villain, a tale as old as tails.” Overall, the album seems distracted, or care free, from this intended concept of manifesting the villain Donny Flamingo into a musical work.

First thought: It’s fun as hell! Starting off with a bombastic “Theme to Donny Flamingo”, the jazz ensemble kicks the listener in the cut and indeed Donny Flamingo is being built from the ground up as this art-deco, disco king who you, like, want to fuck with (for a good and classic time) but something about them also seems too intimidating to bother with. No previous attempt of such from Capyac. It’s a grand entrance that isn’t spoiled, only until “Gold Rush,” the pop single brought out. The practical-effect seems more optimistic and opportunistic, decent for Flamingo lore, but has the unfortunate taste of Bruno Mars more than James Brown. Donny Flamingo quickly shifts from the potential of your comic book villain to, not even an anti-hero, but a contemporary fuckboy, albeit fashionable, with a self-impression of being poetic. The glistening luster of their diamond suit dulls and their hair falls flat with grease. Try that on for a visual.

But concept aside, for a moment, the opening three tracks are varied dramatically from the rest of the EP. Dance-centric builds of phaser synth and arpeggiated dings such as on closer “Stamina” echo more often than the guitar licks and accompanying bass lines, something reminiscent of Daft Punks unfaithful Random Access Memories. “Fade Out” is the only lyrical track which could offer the tonal substantiation in its variance to the rest of the work, laid in a bed of hip-hop rhythm and LFO. Featured guest emcee RuDi Devino, another Austinite, doesn’t add much but rehash that yearning to get away; that glamorous globalized life that Donny Flamingo lives, told by his crew. The misses stack up from here.

“Cat Song” vibes like a Erykah Badu single played on an FKJ track, without nearly the consequence or success.

“Down In It” features the favored Caroline Watson and hopes to impress as their new hit, much like “Speed Racer” did by surprise. It kind of doesn’t…

Capyac do like to make people dance, and what Donny Flamingo lacks in story it possibly gains in production. “Karmann Ghia” throbs as a slowed jam which swells with bass riffs too polished to ignore and a sex-drive that people can borrow from. In its own unique way it fits a feeling that the car embodies – maybe Donny Flamingo drives? Near the four minute mark that pacing is throttled to hip-braking speeds, clicks and shakes of percussion instruments finish it off.

And something else the rest of the songs do, like the epitomizing “Flamingo World Champion,” is swing the idea of Capyac back on itself. A nod to their first full-length Headlunge, a fused take on electronic synth and guitar just keeps coming and going, again on “Stamina.” Observably, the main difference between Donny Flamingo‘s beefy track list and prior releases is its desire to leave you smiling. It only does this halfway, sort of like how Donny Flamingo is only halfway a villain, but also just someone you might know (like he’s been around and you notice him in passing). Capyac halfway misses on this EP as well, granted, in order to build a basis for shows that you can enter knowing to shake a leg, practice must come first. Who Is Donny Flamingo? can service to that.