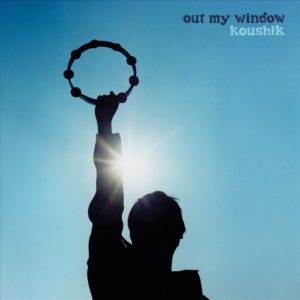 2005’s awesome “Be With” marked Koushik on our map. Coming from Stones Throw records, it was no surprise to notice that Koushik was jazzy, layered, delightfully free-form at their best moments, and above all else: miraculously well-produced. DJs here have long touted the merits of their labelmates Madlib and the late J Dilla, as incongruous as it may sound… For the record, I’m still working on my hip-hop lingo.

Anyway, to come back down to earth, I was pleased that the title track “Be With” made it onto this release early on, but I’m also glad that there is some divergence from their style on the last album. Rather than sounding like a production project to get lost in while trying to keep up with, Koushik’s Out My Window sounds much more like the work of a psych-pop band that’s just trying to make you smile on a sunny day. It’s less of a downbeat experiment with intelligent drum and bass rhythms, and more sweet spot-aimed atmospheric noise with driving percussion. In just about every way, “Lying in the Sun” exemplifies this: upbeat Magnetic Fields-esque string plucking, steady drum beat, more focused vocals, and trumpet blasts that inject sunshine right into your eyes. As the melody becomes more established, Koushik cut loose and tinker with the beat some, just to keep it interesting.

Many of their previously established strengths are still present on the album, but they have new tricks that are sure to delight new and old fans alike.