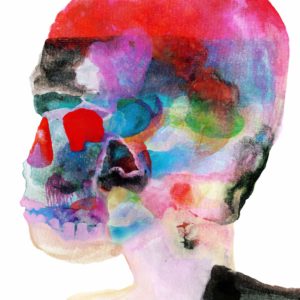 In 1993, Britt Daniels and Jim Eno put a band together in Austin, TX with aspirations of headline tours, festival appearances. They have since risen to the occasion, owning a major spot in the popular SXSW week-long event in their hometown and with eight prior album releases to show. With their ninth album, Spoon’s Hot Thoughts continues on their legacy of indie-rock meshing with tinges of jazz and punk. Electronic production and pop influence make their sound more lively – a fun album compared to previous. Undoubtedly a solid follow up to They Want My Soul, which garnered critical acclaim, Hot Thoughts attempts a newer, experimental sound on songs in the mix, but doesn’t necessarily break new ground for Spoon.

“Hot Thoughts” opens the album and speaks for much of the release; a clipped, catchy chorus with a electronic drum beat that yearns for movement from the listener. This is varied with songs like “Do I Have to Talk You Into It” which is relaxed and sloppy, yet still rhythmic, complimented by playful guitar melodies. That playfulness is carried throughout, but with jazzy piano as well as disco rock influences to create a mood-lifting spirit on Hot Thoughts.

Finishing up the first half of the album ends in a shift; “Pink Up” veers more experimental with emphasis on cymbal, xylophone, and maraca and less on punk/rock. The slower, melancholy melody takes the album into a different direction a straying aware from guitar is indicative of that.

The second half reenters with more rock, starting with “Can I Sit Next to You” which reminiscences on Red Hot Chili Peppers with the drum beat and staccato guitar, but Spoon made it more modern with some good, floaty synthesizer melodies mixed in. “I Ain’t the One” has the most angst on the album and is minimalist in its use of instruments with lots of dramatic pauses and layering of voices to be a perfect song for when you want to let out some anger. “Tear It Down” has a smooth rhythm that makes you want to dance, and a happy beat and catchy chorus that reminds of some of The Killers songs or other popular rock groups, so though not the most original it is a quality rock anthem song. The last one on the album, “Us” goes in a much different direction than the previous rock songs. It is an instrumental, jazzy piece with a saxophone taking center stage that starts out darker and more uncomfortable and then a sonorous melody overtakes with a xylophone that brings peace and joy. The song itself is okay as ambient music, but it seems sorta strange after the rest of the album, with “Pink Up” being the only one that ties it in at all because the rest is more standard rock.

The album has a few gems that will probably be somewhat big hits such as “Hot Thoughts” and “Do I Have to Talk You Into It,” but it is unlikely any will sweep the nation. This collection of songs is a satisfactory, divergent addition to Spoon’s total work, and meeting expectations, though does not exceptionally exceed them.