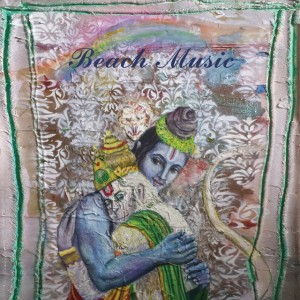 Beach Music is a whirlwind of influences, from mellow indie rock to smooth techno. Alex G’s seventh project is a seemingly incoherent set of emotions that stems from the difference in his recording process. Written in his apartment during breaks over the course of a year instead of his usual uninterrupted sessions, Beach Music reflects the life of a touring musician. Instead of focused sessions, Giannascoli drew from whatever interested him at the time. This mentality is clearly reflected in the meandering path and liberties that his newest album takes.

Right off the bat, “Intro” provides a jarring experience uncharacteristic of Alex G. A lo-fi recording of a punk rock song fades away into the opening songs of the album. His first few songs reflect his past work. The steady acoustic strumming and thumping beats throughout the album do well in providing a foundation for his music, not unlike his past offerings such as DSU. While not offering much variety, the songs stick to classic formula that repeat listeners will appreciate.

A shift of tone occurs with “Salt” and “Lookout, which slowly introduce electronic undercurrents in the album with the use of ambient synths and pitch-shifted vocals that continue to be supported by rhythmic guitars. The listener is lulled back into the indie tone of Beach Music with “Brite Boy”, only to be taken aback by the somber atmosphere of “In Love”. One of my favorite tracks, “In Love” is supported with the talent of John Slavin’s trumpet and Mike Corso’s bass, which lends a beautiful, intimate feeling.

The album continues to surprise, with the organ and synth infused “Ready” and reverb and pitch-shifted “Station”. It ends on “Snot”, a fusion of the many influences Alex G displayed throughout the album. The flow of the album is also interesting, with some songs linked continuously with each other, giving hints about when he recorded several batches of them. Additionally, Giannascoli’s vocals lend a clean ambience. It’s often difficult to tell whether his voice or his instrumentals are in the foreground or background of the music, but it lends a certain ethereal tone.

Overall, the album continues the melancholic but oddly upbeat indie rock Alex G is known for. Though a little repetitive, Beach Music builds on the past six LP’s, and indicates the myriad of musical influences that Giannascoli draws upon. Beach Music is representative of the evolution of his music, marking progress from the rougher lo-fi and mumbly feeling of his previous work. Longtime fans will still appreciate the indie rock roots, while general audiences will enjoy the variation found in the middle of a chaotic but coherent album.