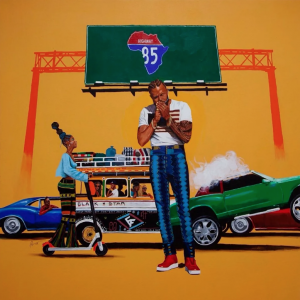 Jidenna’s 85 to Africa is a solid piece of art with 11 songs that will all take you away with its 808s, soothing R&B sounds, and some hardcore rap. After the simmering success of his first album The Chief, I instantly gravitated toward Jidenna when I found out he was in the Netflix show Luke Cage, and from that moment I knew that I had to learn more about him. Starting off, he comes out to pack the punch and cement his name in the rap game. He shows that he’s not like any other performer at the moment.  I really love the accents on the beats in 85 to Africa. The album starts strong, hitting hard in all the right places. His wordplay is something to note as he switches between accents in the subtlest of ways. The same thing occurs in “Zodi” and it’s a refreshing switch up as the beat mimics instruments found in African culture.   All the songs carry a message to which I appreciate mainly regarding the state of black social interactions today either for better or worse. He speaks on issues of black on black violence and the perception that people fear those in the black communities yet they want to emulate our mannerisms. This comes to light in a few songs, but especially in “Pretty & Afraid.” I personally resonated with the phrase, “all I want is for others to look at you the way you look at me” and I think many other feel that same way.  He also has an African artist featured, which speaks to his character in that he doesn’t forget where he is from. Mr. Eazi featured on “Zodi” is a Nigerian artist and his voice fits perfectly on this track. This one is comparable to “Zodi” in my opinion in its ability to really get you moving. The other features on the album include Gold Link in “Babouche”, St. Beauty and Mereba in “The Other Half”, and Seun Kuti in “Worth the Weight.” One of my personal favorites off of the album is “Sufi Woman”, partly for the beat and the guitar, but also because you can’t help but sing along and just groove to the beat. This track, as well as “Vaporoza” are sure to get you moving on the club floor.

In his other works he talks about his family and he does the same thing in this body of work by paying homage to his parents who brought him to this country. They worked extremely hard and they wanted him to do the same by going to school and becoming a doctor or an engineer. Although he didn’t go that rout, he still has a huge voice in the community and he speaks in depth about these issues in “Jungle Fever” and equates Atlanta to the jungle in some ways. In all, there’s nothing that I don’t like about this album, and I’ve found myself constantly listening to these songs over and over again.