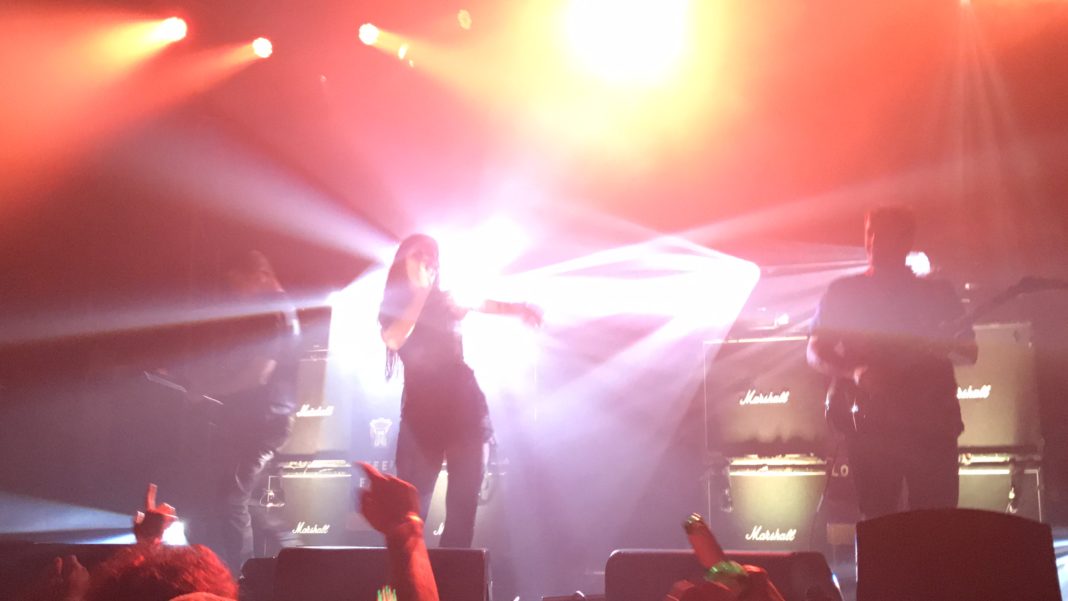 With each album since 2010’s Treats, Sleigh Bells have demonstrated slightly more nuance and class in each release, reigning in the distortion in favor of more nuanced musicianship. Luckily, none of this restraint could be seen in their performance at the Granada, as the band seemed intent on destroying the eardrums of every single person in attendance in support of recent release Jessica Rabbit. The night first got off to an interesting start with opener Tunde Olaniran, an artist at the intersection between Indie R&B and trap. Given the crowd’s presence for a noise pop band, the performer’s mix of falsetto crooning with rap fell slightly outside the expectations of most attendees. However, Olaniran’s infectious energy, excellent backup dancers, and engaging performance eventually got the crowd pumping. The energy did tend to lag at times, mostly during slow, instrumental interludes or the rap sections (which were obscured slightly in the mix by the bass line). Despite these lulls, however, the crowd seemed sufficiently fired up by the time Tunde closed out with the trap anthem “Namesake,” paving the way for the frenetic energy of Sleigh Bells.

The wait between opener and headline seemed almost nonexistent, and for good reason. Exploding out of the gate with the staccato strumming of “Unlimited Dark Paths,” Sleigh Bells revealed an extremely minimalist touring set up. Front-woman Alexis Krauss dominated center stage, flanked on either side by both regular bandmate Derek Miller and touring musician Ryan (whose last name was given, but lost in the deafening cheers of the crowd). Each guitarist stood armed with only a Jackson DK2T and a 2×2 cab of Marshall amps; no other banners, ornamentation, or distractions had any place on the stage. Taking advice from their own discography, the band seemed to have brought an infinite number of guitars; with distortion cranked to the max, Derek and Ryan managed to assail the crowd with a wall of sound without burying the vocals in the mix.

Krauss wasted no time in whipping the crowd into a frenzy; a master of stage presence, the front-woman took up the entire stage, able to belt out the anthemic chorus of Jessica Rabbit lead single “It’s Just Us Now” while ricocheting across the performance space. Taking every opportunity to sing directly to the crowd, Alexis continually engaged her fans, whether singing directly into the crowd or teetering on one of the front-stage speakers to tower above attendees. One of the night’s highlights included Krauss descending into the pit and crowd surfing her way back to the stage while somehow remaining pitch perfect in delivering Treats standout “Kids.”

The energy was driven further towards redlining by the spectacle of lights provided by the band. A heavy dose of strobe accompanied each cymbal crash or guitar riff as the performers remained shrouded in near darkness, save for a colorful tinge of minimalist stage lighting. The band only emerged from the shadows during set list climaxes such as “Crown on the Ground,” providing a colorful contrast which added a dynamic element to the show’s energy.

Ending the night with a crowd sing-along to “A/B Machines,” the band concluded an amazing set that felt all too short. With a minimalist aesthetic and spectacular energy, the performers allowed their music to speak for itself, and speak (or scream) it did. In closing, Krauss explained how she “…[could] always count on Dallas to catch and support me!” With a performance like this, it’s no wonder Sleigh Bells has always received such support – the only ones who missed out here are those who didn’t catch Krauss and co.’s energizing performance.