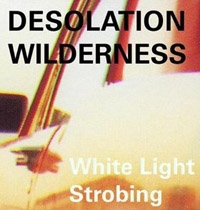 As Dr. Dow mentioned in his lecture on grunge(y) music, the Olympia, WA based record label was built from the ground up by Calvin Johnson and a handful of other artists that didnt know quite what they were doing with their instruments. The charm of opening an album by the Beat Happening (or any of the early K productions) was that the approach was very much against-the-grain, but the music was so noticeably handcrafted that, given the proper chance, it was difficult not to identify with. K quickly became an outlet for many amateurish musicians, and created a cozy space in the alternative music industry.

That being said, Desolation Wilderness is not one of those amateurish bands by any means; although its hard to deny a certain human element in White Light Strobing that makes them deserving of The Shield Around the K. Music as mellow as this rarely seems worth the time, but each song offers its own reward.

I was irritated on the first few listens, feeling as if the album dropped off about halfway through as the songs became less and less pop-like; it took a while to realize just how appropriate (and K-like) this was in context. Leaving Song makes way for the rest of the album: a short arrangement of mellow instrumentals that show startling restraint and attention to detail. Immediately, Road Song sets the pace as the first that isnt initiated by steady cymbal and bass, and gives the listener several layers of instrumentation to get lost in beneath a superficial 4/4 rhythm. The title Forget Everything is equally appropriate, with rudimentary hooks that compete with intoxicating cascades of high-end guitar. Vocals are a welcomed addition to Jupiter, but do little to break the entrancing pattern that has been set. Soft coos of just a memory are the only lyrics that arent too washed-out by reverb to be comprehensible.

Although White Light Strobing is a little on the quieter side, they hardly if ever allow a riff to stagnate. Their take on “mellow” isn’t “boring” or even “minimal”; there’s always something there to concentrate on and enjoy, although that may not be the point. Despite it’s admirable subtlety and intricacy, White Light Strobing is best enjoyed when you’re just looking for something light to help you relax and put a smile on your face.