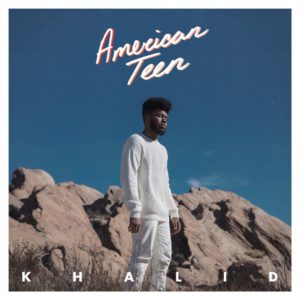 Celebrities such as Kylie Jenner have been playing Khalid’s music in their snapchats, and others have shouted him out on Twitter, garnering him a surprising amount of attention. After several interviews and a month-long tour through the states, all leading up to the release of his debut album, American Teen, he’s ensuring that his name never left the fans’ minds.

The title track “American Teen” makes it immediately apparent that Khalid’s home town, El Paso, is a focal point. “Oh I’m from the city of the 9-1-5/Where all the girls are pretty” he sings over a bubbly beat with upbeat synths. Putting youth at the forefront, the R&B artist sets the pace of being a growing up as a military child and moving around a lot. El Paso was the first city to feel like home, shaping the sort of experiences that he tries to articulate on American Teen.

Despite starting out the album incredibly upbeat, it quickly takes a turn, and the middle part of the album is very melancholic. “Saved” recounts the feelings after a breakup, and being unable to really let go. They lyrics are simple, but they have a strong impact – “The hard part always seems to last forever” and “I’ll keep your number saved/’Cause I hope one day you’ll get the sense to call me,” he wistfully declares. This track is followed by “Coaster,” which continues detailing the emotions that he tries to work through to move on from his ex-lover.

The majority of the project focuses on different themes of love, including heartbreak and unrequited love. However, this is almost to a fault. Other than a few tracks, the majority of the tracks focus strictly on some sort of heartbreak, making it feel sort of one-dimensional. Even on the songs with upbeat instrumentals, most of the lyrics tend to be gloomy. It’s understandable though, when you are a teenager, the world often times feels like it revolves entirely around finding love, and breakups make lasting impacts.

Khalid’s voice has a great amount of range, which he does a good job of showcasing throughout the project. His abilities are well developed, and even though he only started pursuing his musical career in December of 2015, he sounds much more experienced.

There is a lot of variety in the production on this album. They are fairly simple beats, and they’re never the main point of attention, the focus is always on Khalid’s voice. They’re still really fun to listen to though, and make you want to get up and dance, “8TEEN” being a track that really stands out in this regard.

As a debut album, American Teen, is impressive, especially for an artist as young as Khalid. It has a consistent theme, solid production, and Khalid’s vocal abilities are impressive. Although the lyricism is fairly simple, it does a good job of creatively expressing his feelings. It would have been interesting to see Khalid explore more aspects of adolescence other than heartbreak, but this is still an impressive first effort.