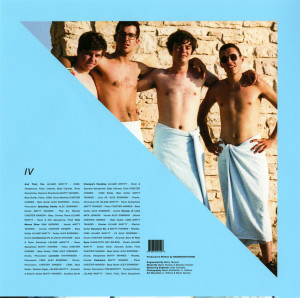 Regardless of the number of voicings, substitutions, modulations, or any kind of compositional techniques that are applied to them, standards inherently demand not to be performed too outside of the box, for they were outside of the box at their time. The struggle for many artists under the genre umbrella of jazz is to find their own distinct voice even though they’ve almost been trained to think in the manner of their predecessors. BadBadNotGood, forming in a college jazz program, know all too well the bittersweet power of standards.

Back in 2013, I, an adolescence who was still relatively new to most music, was making my first voyage to SXSW with only the goal of seeing BBNG live inside of a creepy warehouse. At the time, they had begun to implement their own compositions into their live shows as they became more confident in their skills that would go on to be on their subsequent album, III, that consisted entirely of their own songs. Bonding over their love of hip-hop, BBNG started off performing insane arrangements of works that they felt were pertinent to their musical upbringings. Everything from Nas, to Waka, to Joy Division, and even Legend of Zelda were given homage through the groups ability to arrange and manipulate structure in their first two studio releases.

IV is the groups second studio album that consists entirely of original compositions and reveals just how much more the band has matured over these past couple years. The tracks maintain a somber and brooding tone throughout. The album opener “And That, Too” perfectly sets the mood for the album with a steady groove that underlies the primary theme of the song that is then varied through added instrumentation, and then repeats the sequence while adding and subtracting layers as the bands newest member on winds, Leland Whitty, solos over the progression. Whitty has been a long time collaborator on four of the band’s studio albums, but officially added on IV for record and live lineup. His presence can be felt heavily on most of the instrumental tracks, especially the title track which bursts with energy from the very begging as Whitty showcases the main melody as he is being expertly comped by Chester ‘Perfect Pitch’ Hansen (bass), Matt Tavares (keys), and Alex Sowinski (Drums). The tune goes from crackling to an intense sizzle that maintains all of the heat, and quickly pops back into the main theme until Whitty is left alone soloing.

BBNG treads both familiar and new territory on IV while keeping it very fresh; “Speaking Gently” as it were a cut off of III with an expanded sonic palette and an extremely catchy melody; “Structure No.3” exemplifies their maturity, finding the balance between expression, but also reservation, with musical repetition as well as call and response between the band members, as if the they have become extensions of each others’ psyche, consequence of their long term chemistry. BBNG has also added another layer to their songwriting with new collaborators. Fellow up-and-coming Toronto natives Kaytranada on the thick “Lavender,” playing the CS60, and Charlotte Day Wilson crooning on the sultry “In Your Eyes” lend their talents, and in turn, BBNG reciprocate to put their heads together and create a song that exhibits all of their abilities. Colin Stetson and the band feed off each others strength on the foreboding pulse of “Confessions Pt.II.” Stetson’s baritone sax runs over the 5/8 meter is reminiscent of Philip Glass’s if they were played by a mad genius. Lastly, Sam Hering and Mick Jenkins eat up the hypnotic old school soul BBNG puts out on “Time Moves Slow” and “Hyssop of Love” to bring the album full circle on showmanship.

BBNG has always been able to build and release tension beautifully throughout their discography in a way that most always keeps the listener begging for more. However on the album’s closer, “Cashmere,” they leave off on an almost too uncharacteristically ambiguous note by adding a fermata that doesn’t lead to any significant release, but rather tapers off. This could be the type of ending that BBNG felt encapsulated what they felt the album was conveying, but comes across as unnecessary and lingering.

From releasing albums on Bandcamp, touring with the legendary Ghostface Killah, to releasing internationally charting albums, BBNG’s future has never seemed brighter. Regardless of small and insignificant hangups, BBNG has shown much maturity and growth from their pool of potential that seems to never stop overflowing, and IV only solidifies BBNG’s spot as the young voices of jazz coming into their own.