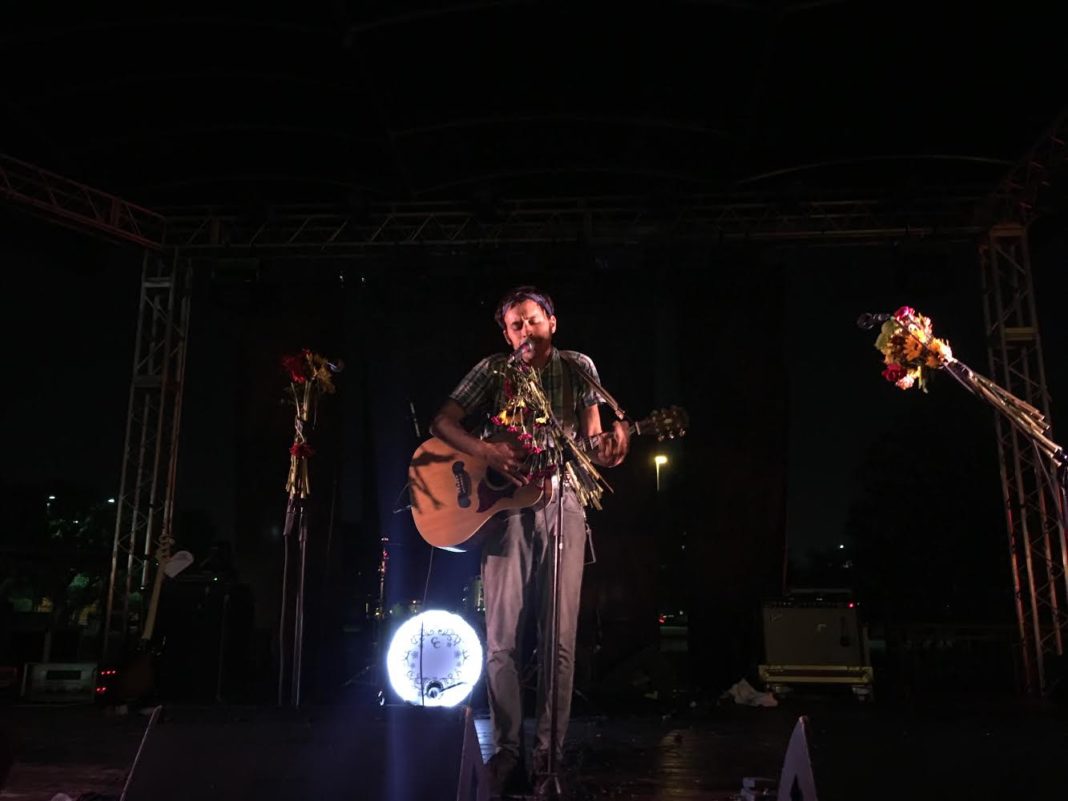 If the guy standing next to me hadn’t just told me that Zachary Garren, lead guitarist for opening band Strawberry Girls, was from Dance Gavin Dance, it was obvious the second he hit the first note on his guitar. Not a word was spoken during any song other than a very abrupt and excited “WHOO!” from the crowd but there was no denying that their energy was tremendous. They were there to rock out to some funky guitar riffs and punchy bass hits, and that’s exactly what they did.

“The vocalist cut his hair, I feel old” were the first words Savannah said to me when Pianos Become the Teeth came on, and that weirdly set up pretty much my mood for the entire set. It was such a refreshing sight to behold, every person in the band being as passionate about the vocals as the vocalist was. You could tell they love what they do, they’re proud of it, and their passion is more than enough to be proud of. Lots of emo bands move around the stage with force, but their chemistry was natural, powerful, and admirable. They were a perfect opener for an [A->B] Life era mewithoutYou, and I’m so glad they were on this bill. During one of their final songs, “Hiding,” Savannah turned to me and said, “I cried to this song during a math test once”, and even though I’d never listened to the band, I felt that. The entire set made me feel nostalgic for music I used to listen to.

After some time had passed and my anticipation was growing exponentially, Michael Weiss entered stage left in an overcoat, followed quickly by the rest of the band. Setting up quickly and quietly, the guitarist led the band immediately into “Bullet to Binary”, the first song on [A->B] Life. The distinct notes that any mewithoutYou fan can pick up on immediately filled the crowd with an overwhelming sense of excitement. I knew, they knew, we all knew the treat we were in for. The band played their first-ever released LP from start to end, with Aaron ducking offstage during vocally-light parts of tracks to either rest, drink water, or play with his daughter for a minute or two. The entire band took a minute or two to rest during transition tracks “(A)” and “(B)”, (surprise surprise, right?)

Although the band has changed and shifted dramatically over the course of 15 years, they played that old album as if it was their album release tour. A much heavier album than the majority of their albums, especially their mid-to-late 2000’s albums, you would never be able to tell how much their sound has changed (if it weren’t for the fact that after the [A->B] Life set, they played a grab bag of songs from the rest of their albums). Aaron’s powerful vocals were reciprocated with even more powerful, even more excited shouts from the crowd. Even if he admitted that he’s getting older, and the physicality of performing such an intense album can be straining, he still gives the show his all, and Dallas happily returned the favor. About halfway through the [A->B] Life set, he took a minute to discuss that “admittedly, Dallas used to be a city that we would come and get rowdy, and they would get rowdy back. But, I’ll be honest, in the past few years, it seems to have taken a nosedive. Less people seem as excited, but you’re all here, right?” The dig at Dallas was met not with outrage or defensiveness, but apologetic groans and promises that this night was their night.

After the A->B Life set ended, the band exited the stage to take the breaks they couldn’t take while Aaron was ducking offstage, and Aaron himself hopped back onstage with an acoustic guitar to perform a couple of solo songs. “Chapelcross Towns”, a track from the B-sides to their latest album Pale Horses, was performed slowly, softly, and sweetly. After ending that song, he launched into “The Fox, The Crow, and The Cookie”, a track inspired by a fable in which a crow believes himself to be outsmarting both a baker and a fox but, ultimately, having his fatal flaw of pride being his downfall at the hands of the fox. The absolute silliness of the song, coupled with the fact that it was the first mewithoutYou song I had ever heard over seven years ago, filled my heart with such indescribable joy. Here was a grown man who, not fifteen minutes ago, was screaming lyrics begging forgiveness from Jesus Christ, was now pretending to be a sly fox, or an enraged baker calling a crow a “rotten wooden mixing spoon.” Perhaps the joy I felt was due in part to the fact that the period of time in which that album was written is self-described as one of the happiest times in Aaron’s life. Whether powered through nostalgia or just plain-ol’ dumb joy, the entire crowd happily sang along to this story. You could hear the smiles in everyone’s voices!

Once his solo acoustic set ended, the band re-joined him on stage to perform a few tracks scattered throughout their lengthy and genre-bending discography. Whether it was along to heavier tracks like “Mexican War Streets” and “Torches Together”, or sing-song tracks like “In A Sweater Poorly Knit” and “Nice and Blue Pt. 2”, the crowd’s synergy and overflowing admiration for the band came together to create a beautiful experience, because mewithoutYou fans are nothing if not dedicated. Calling out and repeating “I do not exist”, with a sea of people flanking me calling out the same thing, turned out to be strangely cathartic. I knew I was at home, I knew I was right where I loved to be, in a sea of love. And I knew, in that moment, I was so glad that I did, in fact, exist.