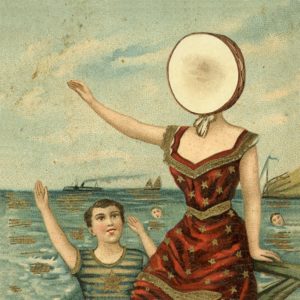 (Im not a fan of long album reviews. I dont like it when a reviewer makes a habit of comparing music to something completely abstract or unrelated. Music isnt like blowing on a dandelion in a field of sunflowers on a bright summers day; thats bullsh**. That said, I also believe when a person is discussing their all time favorite album, it is beneficial to put it in proper perspective. Considering that In the Aeroplane Over the Sea is my all time favorite album and this is my first album review, I decided it would be appropriate to write it in a much more autobiographical way than I would normally prefer.)

I guess you could consider me a latecomer to the world of independent music. I didnt buy my first indie album until I was a junior in high school and even then the album was Franz Ferdinands self-titled debut. In all fairness the album had not yet made it to MTVs prime rotation, or many store shelves for that matter. Up until then my music collection consisted of nearly every release by The Smashing Pumpkins and a bunch of old Rock and Rap CDs my brother gave me.

A friend introduced me to Neutral Milk Hotel. He was the first person I knew with an interest in independent music and I was the only person he knew that appreciated his recommendations. It was the classic indie kid meets impressionable other scenario. One day after school we were driving around in his Mini Cooper (which, Ill have you know, he got before it was cool) when he put In the Aeroplane Over the Sea (further referred to as IAOS) in his CD player. He had already shown me a few albums that I was quite receptive to, but this was very different from anything I had ever heard before. My reaction was kind of like getting drunk and losing your virginity- nothing is how you imagined it should be; you tell yourself its wrong, but deep down you love it. Jeff Mangums voice was painful to listen to, with him holding high nasally notes until they resonated in my ears like a dying frequency. I listened close and tried to relate to the lyrics, but even then, it was too cryptic and imaginative for me to make sense of. Aside from the vocals, the instrumentation was disorienting and fuzzy, sometimes sounding like a marching band and other times sounding like pure noise. I thought I hated it, I mean, I couldnt understand anything about it, but my attention was held firmly in place by something I couldnt explain.

We didnt talk much during the drive and when the CD ended I felt an unusual sense of intoxication (pardon the hyperbole). I went out that day and bought IAOS. Ever since, its been my favorite album. Most people find an album they like and become entangled in it until its novelty fades or something new comes along. Im one of those people. I had Strawberry Jam on loop in my car for about a month, but I wouldnt dare do the same with IAOS. Ive given myself a few rules to preserve the albums original integrity: I avoid skipping songs, I do my best to finish the album in its entirety, I never listen to it more than once in a row, and I sing along to every song. It might sound silly, but to refer back to my previous hyperbole, my guidelines have kept me from building a sort of tolerance to the album. It still retains all of the intoxicating charm it had on first listen (and then some). Ive grown to appreciate the way Mangums nasally voice portrays a spectrum of emotion. The passionate siren-like sound he obtains in Two Headed Boy pt. 1 is just as inspiring as the calm chorus of Communists Daughter. Ive learned to recognize the chaotically sweet melody of songs like Holland 1945 and King of Carrot Flowers pt. 2&3 and the soothingly simple acoustic guitar progression of Oh Comely. I appreciate the purposefully cryptic language used throughout the album. Its said that IAOS is based on the life of Anne Frank, which I dont doubt, but to me theres an endless number of stories to be found which only add to its versatility.

More than anything, Ive come to very much admire the continuity of the album. It listens more like a book than a CD. Each song is a chapter and even though some chapters might seem better than others, none sound as appealing alone. Each one builds up to the music-less climax of Jeff stopping the tape, setting down his guitar, and leaving the room. Shortly after creating an album that many (including myself) would consider perfect, Neutral Milk Hotel disbanded and Jeff went on to live a reclusive life recording Bulgarian folk festivals. Mangums exit emphasizes a very human aspect of In the Aeroplane Over the Sea. I find it ironic that the most powerful part of the entire album isnt played or sung; it has no melody or lyrics. Its just the sound of Jeff.