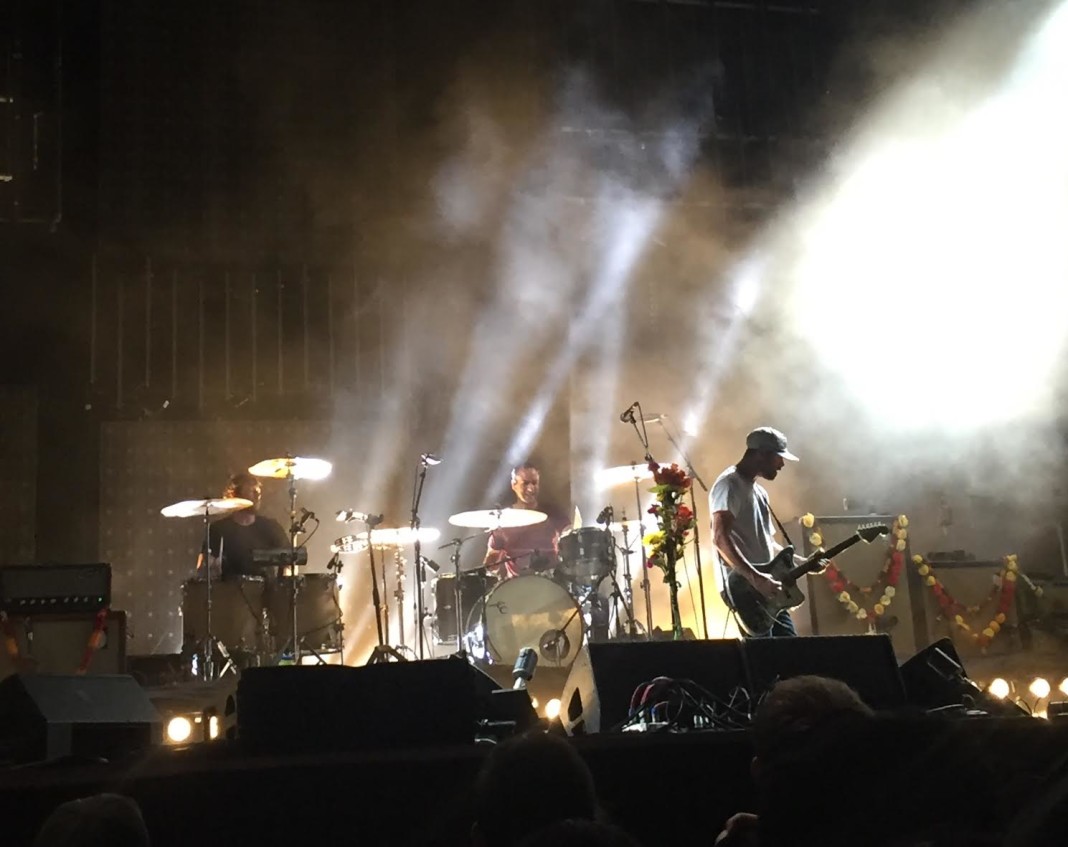 The co-headlining tour featuring Brand New and Modest Mouse took place in Grand Prairie at the Field next to Verizon Theatre. The Field, complete with food trucks, extravagant stage backdrops and sweat-drenched attendees had more of a festival vibe than a simple outdoor concert. The two veteran alternative bands venerated by fans and critics alike, both under the same stage. No openers, no half-sets. A large appeal to attend a concert of this magnitude is to watch these bands cut themselves wide open and hear the front men spill their guts on the stage. The night was a time to re-live the moments of desperation and scream back to our favorite band the words that in our growing pains seemed so poignant. Our attempt to grasp on to sanity and our aid into becoming the semi-adjusted people we all presently pretend to be.

Perhaps the main problem is the fact that these bands represent a different eras. Modest Mouse, who have been around since 90’s represent a time when “indie-rock” was not a widely used pseudo-genre; they reigned during a time when one relied on friends and word of mouth to find out about when their favorite bands would be in town. Much of the allure has always been that Isaac Brock has a knack for finding humor in the appalling aspects of life. Brock’s back and forth between restraint and emotive yelping and vocal eccentricities make for unconventional but enjoyable sing alongs. On the other hand Brand New, who at their peak were probably a mainstay of their fans Myspace profile page, represent a time when fans analyze, scrutinize, and probe into the every move of a band to find out the hidden meaning behind lyrics. Fans of this era scour the internet for every live version of b-sides and demos. Jesse Lacey’s impassioned vocals let the pain agonize him, almost to self-indulgence. Jesse Lacey represses no emotion; he broods and releases them onto his legion of fans. The two bands have been alternating the headliner spot, truly making it a co-headlining set. In this stop Modest Mouse was the first on stage. The sun was still out and the crowd appeared restless due to the scorching hot weather. This didn’t seem to stop Modest Mouse from launching into their set with the opening song “Spitting Venom” off of their 2007 effort, We Were Dead Before the Ship Even Sank. In between songs Brock playfully briefed the crowd that he actually “can’t hear a single thing he’s playing”, a minor temporary loss of hearing so he ‘hoped it sounds okay”. The set featured a balanced combination of old and new material from their discography. Despite this, the band strayed away from their better-known tracks such as “Float On” and “Ocean Breathes Salty”. The fan reaction to their early catalogue received more fervor and shrieks from fans. Songs like “Doin’ the Cockroach” and “Tiny Cities Made of Ashes” received the most energetic responses. Still, the audience reaction to Modest Mouse was mostly lukewarm. You could count the people who were there bouncing around for Modest Mouse’s set, if at least in the front section of the audience. Attendees were attentive but uninterested. Modest Mouse’s set was treated like an opening band standing in between you and your favorite band instead of band with two decades worth of music. Once Brand New came on stage the sun was nowhere in sight. There was a slight breeze and the venue had gotten the hint that the audience was in dire need of refreshment and proceeded to spray water onto the dedicated concertgoers in the front section of the crowd. Adorned by artificial flowers on top of the instruments and a wall of massive television screens, the stage looked ready to give audience goers the concert of a lifetime. Brand New opened with “Soco Amaretto Lime” off of 2001’s, Your Favorite Weapon. Although not one for talking in between songs, Lacey embraced the crowd’s excitement and encouraged the crowd to keep the momentum going and screaming “Just jealous cause we’re young and in love” into the open field, which proved to be one of the upsides to holding the show outside. A band known for their unpredictable setlists, Brand New’s set leaned heavy on tracks off of The Devil and God are Raging Inside Me, such as “Degausser”, “Jesus”, and “You Won’t Know” as part of the encore. In contrast to Modest Mouse’s set the audience was watchful of the band’s every move. The crowd gave their undivided attention to their stoic leader. Band and audience alike fed off of the energy of each other; Attendees matched Lacey’s energy with as much fervor as him. Looking around was enough to definitively say that Brand New was the true headliner. Despite how easily apparent it became that Brand New brought in the most ardent of fans, Brand New seems to remain humble. In a mumbled tone Lacey introduced themselves “Hi, we’re Brand New” as if the entire audience was not already aware of who they were.
A clear distinction between the two sets was Brand New received an encore; the former did not. While surely both performances satisfied what fans of each respective band craved, it was hard to not feel like we witnessed a band at two differing points in their career. Modest Mouse seems to be grasping at keeping fans attention; fighting to not be pigeonholed like one of those bands you see out of nostalgia for their first two albums that you liked back in high school (Pixies, anyone?). Meanwhile, Brand New a band shrouded in mystery (will they or will they not break up?), whose fans are as alert to their every move, as hungry as they were 10 years ago for new material and relishes on toying with their fans and has enough eyes on them to do so.