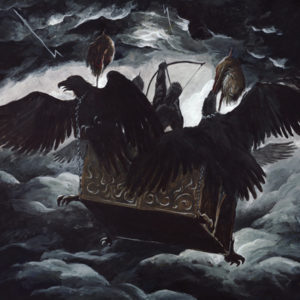 Beginning as a fairly straight-forward, Darkthrone-style black metal band, Deathspell Omega has slowly morphed into one of the most unpredictable and interesting metal bands in the world. Since 2004, the band has developed a unique sound by combining elements of Kayo Dot/maudlin of the Well’s anything goes experimentalism with the off-kilter technical riffs of bands like Gorguts and Immolation. The band hit its stylistic zenith with their sonically complex album, 2010’s intense Paracletus, which was the end of a conceptual trilogy that had begun with 2004’s mind-bending Si Monumentum Requires, Circumspice. Since the band does little to no publicity for upcoming releases and does not tour, the future of the band after Paracletus was uncertain. They had completed the aforementioned trilogy so many had assumed the band might stop releasing music altogether. Yet, in 2012, the band quietly released the solid, yet minor 20-minute EP Drought. Then, four years later, the band suddenly announced the release of their next EP, The Synarchy of Molten Bones.

The EP begins and ends with a dissonant set of horns. In between these two mournful sounds is nearly 30 minutes of sonic obliteration. Where past DsO releases have had somber interludes or songs that slow the pace down a bit, Synarchy never lets up. The EP is perhaps their most primal sounding release since 2002’s black metal entrenched Inquisitors of Satan. Blast beats, angular riffs, and demented vocals engulf the majority of these songs creating a formidable wall of brutal sound. The claustrophobic production enhances the overall oppressive aesthetic that, at times, can be nearly overwhelming. This dense production, like most extreme metal albums, lends itself to turning the volume up as loud as one can bear and letting the waves of sound rush over the listener (merely listening on headphones will only provide a fraction of the experience).

The opening title track implodes into cacophony within the first two minutes and displays a dizzying amount of technical prowess. The intensity only increases during the aptly titled “Famished for Breath” which showcases some of the EP’s most engaging riffs. 10-minute EP centerpiece “Onward Where Most with Ravin I May Meet” fully realizes the project’s extreme aesthetic. Easily the most creative and unpredictable section of the album, DsO highlight all of their strongest features during the piece. Throughout its runtime, the instrumentals aggressively convulse and never stay in the same sonic territory for very long. EP closer “Internecine Iatrogenesis,” recalls the manic, mathcore-inspired riffs of Paracletusand plays as the fittingly, pummeling finisher.

While the overall sounds of Synarchy do not really progress beyond the band’s previous releases, the group delivers an undeniably intense and cathartic musical experience. A new full length album would be appreciated, but Synarchy is complex enough to keep fans satiated for the foreseeable future. Ultimately, the EP is a fantastic addition to the band’s already stellar discography.