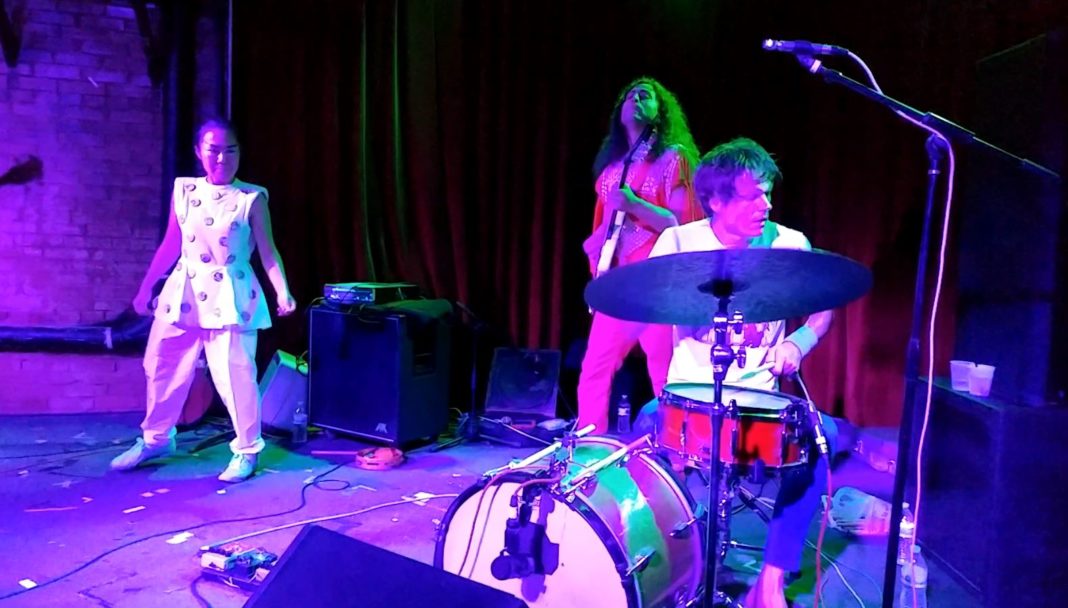 Starting off with the openers, Christina Schneider’s Genius Grant actually did a great job of setting the mood for the rest of the show, as their band fit the sound of Deerhoof surprisingly well. For an opener that I didn’t know was going to happen until they started playing at Dada, it was super pleasant to hear. Remember how I said that they fit Deerhoof’s sound well? Turns out that it didn’t really matter.

After a brief break where half the crowd in attendance stepped out for a cigarette break, Thor + Friends broke up the flow with a couple of songs. To describe this set as meticulous would be an understatement, as Thor + Friends let out a rather meticulous starter. With an oboe and violin in the back as the base, and a theremin which would peer in and out occasionally, Thor + Friends had a good base to start laying out some lines with a marimba. This set was almost intimidating to begin with as it seemed that every sort of progression with the marimba was extremely deliberate and pronounced, almost as if Thor was pounding it into my face (only this time, he wasn’t pounding my ears as he normally would with Swans). After finishing their first piece, Thor introduced the rest of his bands (the Friends). The group title is not misleading whatsoever, as throughout the performance, Thor had to problem taking the back seat as the various friends would come through on their lead moments. The groups language was also super disarming from the intense first song that was laid out. Thor ended the break saying something along the lines of “We’ve got two more short little numbers for you before Deerhoof tonight”. The usage of “short” wasn’t quite accurate, but the numbers were definitely enjoyable nonetheless.

Where do I even begin with Deerhoof? Their setup was extremely minimal with drummer Greg Saunier only having a snare, and a cymbal for his hands to work around. Now with only these simple tools, Greg was able to unleash a wicked barrage of rhythms for quite a good amount of time. Deerhoof started the set with “Flower” from Apple O’, and it set the mood pretty well for the set to come. The whole band unleashed an immense amount of energy from start to end on their tracks, and it held together extremely well throughout. Describing Deerhoof’s sound as “clean” however would be outright wrong, they’re pretty much the best case example of being all over the place.

There were occasional breaks where Greg would come up to the mic and very slowly deliver some messages. Often distracted by vocalist, and bassist Satomi fiddling with some pedals, Greg found a good way to find some time to catch a breather in between songs. The middle of the set saw the play of “Con Sordino”, Deerhoof’s political statement. The performance, and message were delivered extremely well, and it was nice to see the crowd and band operate well on the save wavelength. Speaking about taking breathers from earlier, one thing that definitely did not catch a breather was Greg’s drumsticks. Armed with a shopping bag full of them, Greg made sure that he put them to use by pushing them to their physical limit (and cycling through more and more of them throughout the set).

The crowd got more and more engaged with each song, and Deerhoof were happy to deliver more and more to their fans. When the set came to a close, the band rather quietly uttered “Thank you”, and left the stage (making a rather obvious setup for an encore). After a brief chant of “holy shit” through the crowd, they were back on for a few more songs. Ending on “Basketball Get your Groove Back”, Satomi was happy to showcase the dance involved with the song. She stepped to the front of the crowd to find a member as an example, but there was an obstacle in the way of her selected candidate. “Right hand has beer” Satomi noted, causing a hindrance of this particular member of unleashing any newfound moves. With some quick problem solving, the beer was consequently moved to the ground so that our candidate could demonstrate the moves. The simplicity of the moves (forming an “O”, and a  “K” with your arms followed by a lasso movement with one arm) made it rather easy for the crowd to get engaged for the final song.

Once this was over, a decent chunk of people hung around to buy merch and such. Most seemed to enjoy the show rather well, and I can safely say that this show sits up there as one of my favorites this year.