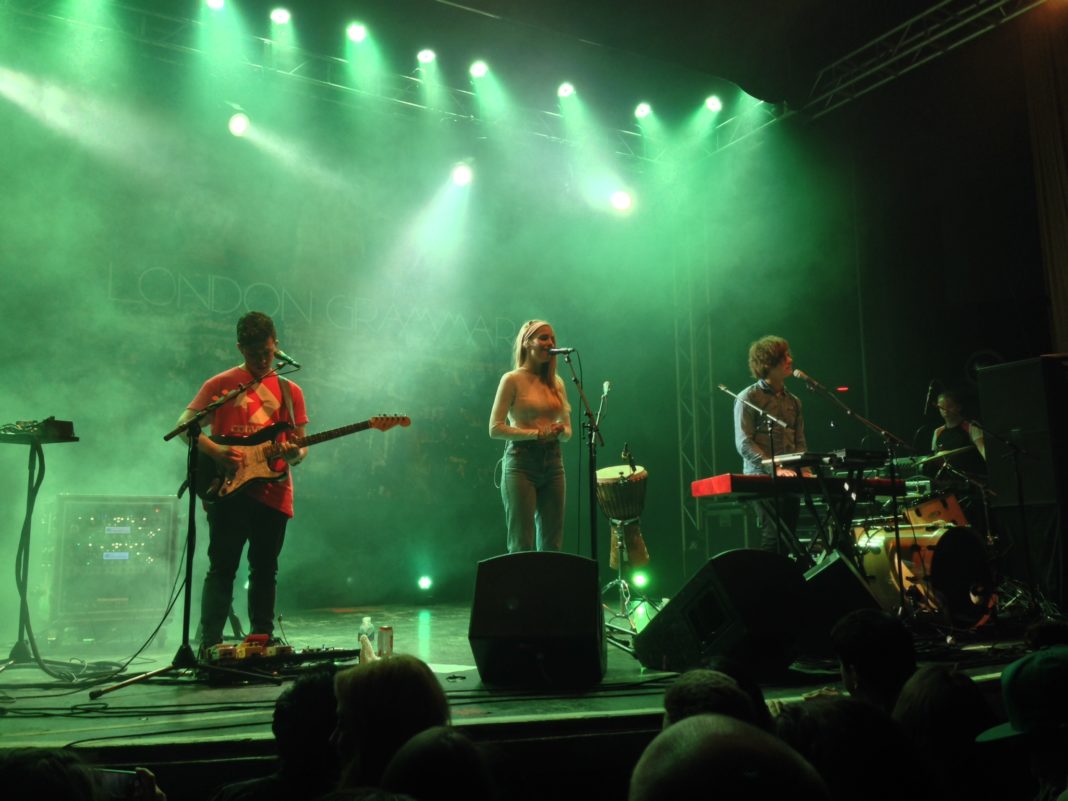 Fans snaked around the edge of the building of the Granada Theater for will call. The line only became longer as the sun set and night fell over the Granada, so it was clear of how much of a following the London-based trio London Grammar had in Dallas.

The venue was about half full when the opening act HighasaKite came on. The group was an interesting mixture of men and women on various instruments. Their short set consisted of a few okay tracks, to be honest, not too catchy nor impressive, but at least the looped euphonium noises filled the time with between standing and the main act.

After the second intermission, consisting mainly of funny tweets projected onto the screen from the fans waiting, London Grammar finally entered. Actually 2/3 of the group entered. An ominous intro variation of “Hey Now” was a nice touch to their already deep sound. The plucky guitar riff and analog keyboard cued for the music to start and shortly after, the front man, Hannah Reid, entered as well. She was the crowd pleaser (more beautiful in person) and all-around wonder woman. The audience applauded her entry.

If you weren’t already familiar with London Grammar, they played most of the songs from their debut album in the set. In comparison to the recorded version, which sounds great, the songs sounded much cooler live; the guitar and vocals stood out fairly but the bass notes resonated through you, especially on songs like “Hey Now,” “Stay Awake,” and “Strong.” I had to keep in mind that this was more of an ambient, lyrical show (not a bass drop for miles away) and that was perfectly okay because the musicality of the trio had all based covered. On a couple songs, Reid and drummer/synth-player “Dot” sang and harmonized together, pretty much melting everyone’s hearts in an instant. The most endearing moment was when Reid got caught up in the moment and teared up in the middle of “Sights.” She had to apologize once the song ended but I could tell the crowd wanted to just hold her forever.

The set as a whole was a beautiful live show. Hannah Reid’s presence was electric and Dan Rothman and Dominic ‘Dot’ Major are excellent band mates, talented on their respective instruments. London Grammar seemed to have established a nice, new, ambient style of music that is never boring or too gushy. My only wish was if Disclosure came on after the encore and played “Help Me Lose My Mind” with Reid, but, alas, nothing is perfect in this world.