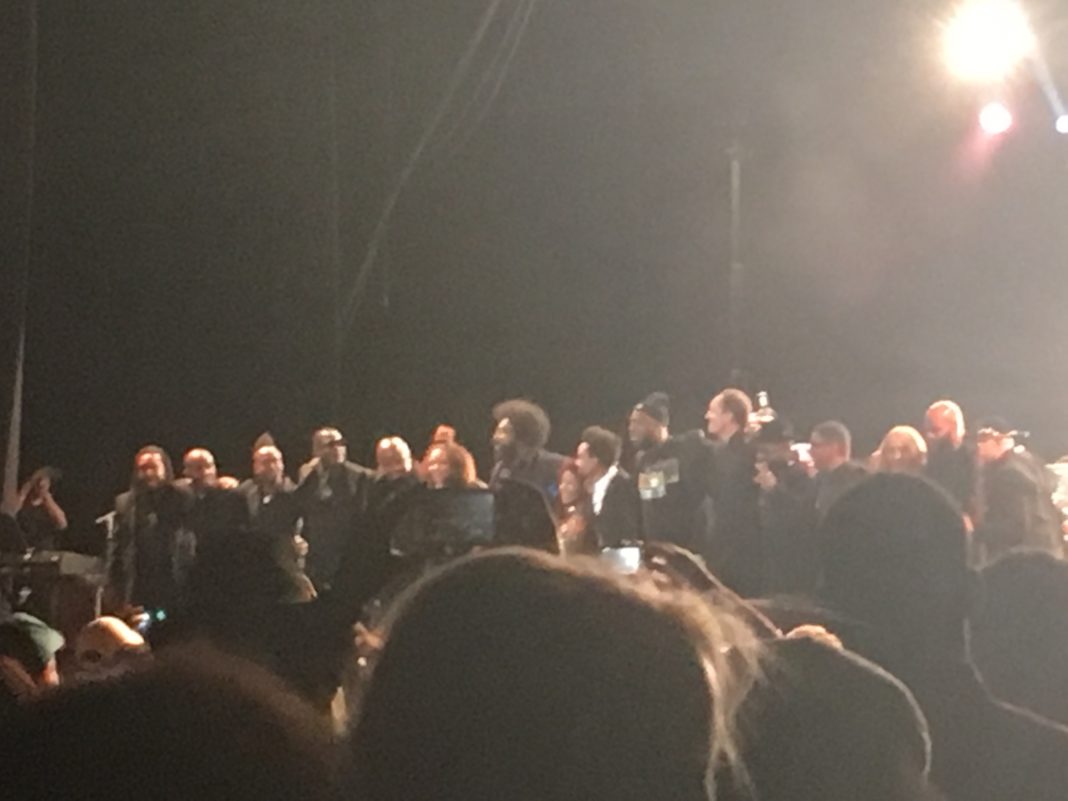 All of the excitement I had for this show was officially justified when I saw The Roots perform a night of symphonic hip-hop along with the the Dallas POPS Orchestra led by the infamous LA-composer Miguel Atwood-Ferguson (who simultaneously plays Viola as he conducts his orchestra) and several R&B/Jazz icons. Special guests who performed their hearts out were smooth jazz pianist Robert Glasper, soul-singin’ Bilal, hometown queen Erykah Badu, and the queen of R&B / Jazz herself, Chaka Khan. WOW. Just naming all of these people and thinking that I was in the same room as them, hearing them giving it their all gives me such an intense feeling of joy. Our very own jazz-expert DJ Killa Kam said “That’s not going to be just any concert, that’s history”, and that’s exactly how it unfolded to the fortunate thousands of fans that came out to the Toyota Music Factory.

When me and my good friend got to the venue, Erykah Badu was already on stage doing her thing with The Roots and Robert Glasper accompanying her on the set while they were performing “You Got Me”. Everyone was giving their snaps and claps while fully tuning in to the voice hailing from Dallas. Then, The Roots opened up space to jam, which let Captain Kirk Douglas mess us all up with a guitar solo like never heard before. Almost all of The Roots members got to shine on their own with a solo of their respective instrument, and each one of them would’ve made a jazz-virtuoso stay up for days trying to play something better.

There was a brief 10-20 minute intermission, and then Erykah Badu came out again to bless us with her voice of cool. Robert Glasper opened by beginning the melody to “Love of my Life (An Ode to Hip-Hop)” which Badu responded with “I met him when I was a..” then the beat dropped to everyone’s pleasure. Everyone followed Badu while knowing every word until she slowed it down to a chopped-n-screwed style, which REALLY HYPED THE CROWD UP and made everyone stand before she resumed to finish the song she made with her previous lover, Chicago-raised rapper, Common.

Then Erykah gets off stage once more to let Black Thought come on stage and introduce Bilal (whom I honestly don’t listen much to), but the crowd seemingly did as they cheered when he appeared on the stage shaking Black Thought’s hand. The Roots backed him as he laid down some high pitched vibes. He made the mood very sentimental by doing several emphatic gestures like bringing his head and eyes up and slowly bring them down and making his performance long and passionate. There was always a collage of wonderful acts on stage at all times. It’s absolutely wonderful how there’s not a second to miss, because if someone did look away for one second, they already missed something incredible. The Dallas POPS weren’t lying low either, all were keeping high profiles at all times and that’s a big factor on what made this concert so damn great.

Then guess what: Chaka Khan comes out. WHAT THE HELL? It wasn’t announced that she would be coming on any of the pages promoting this event as far as I’ve seen, and I was HYPED. Everyone was cheering, I think I may have seen some people crying, but nevertheless, that moment was incredible. Hell, every moment that night was, but damn this moment in particular made it all the better. She came out with an extremely powerful voice and at this moment I’m not thinking or analyzing the show, I’m enjoying my time. She then ended her short segment with one of her most popular songs “I Love You, I Live You” with all the performers backing her.

The Roots then had their segment to jam out once again and finished the rest of the band’s solos while Questlove was in the center like the Sun in the Solar System. Then they all came back out to accompany Bilal as he does one more song to say goodnight. When the song was reaching its final note, everyone on stage hopped on it and hit it with full force. Chaka Khan was trembling with her soul as it was leaving her mouth. Lights were flickering everywhere, Questlove was beating his drums like a madman, right before Bilal threw the fucking mic’ to the crowd.