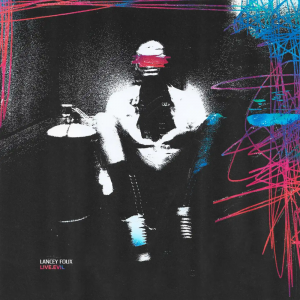 British trap-rapper Lancey Foux’s music most often draws comparisons to Playboi Carti. However, after distinguishing himself as an artist by branching out into psychedelic trap rap and even alternative rap, he was propelled into his own spotlight in my eyes. The fast-paced, aggressive B-sides mixtape FIRST DEGREE did its part in getting my mouth watering for his “real” album, the forthcoming LIVE.EVIL. Unfortunately, this new one from Lancey leaves me hanging. The cinematic title track opener “LIVE.EVIL!¡” misleads the listener, grandly preparing them for a record that is, to put it lightly, less than perfect. With many underdeveloped and watered-down songs included on the tracklisting, it’s a wonder how more of the highlights from FIRST DEGREE didn’t make it onto this project. By the end of LIVE.EVIL, I’m left disappointed by the absence of excitement I’m accustomed to hearing from Lancey Foux, and I’m aching to listen to nearly any prior work of his.

The record starts off strong with the first few tracks sounding like they’re feeding off of a drug-fueled fury from Lancey. “RESPECT” is among the outstanding tracks on the project, where Lancey administers a healthy dose of his classic one-liners. The lyrics freshen the track up, with Lancey’s floating chorus connecting words like puzzle pieces. “OUTTAMYMIND!” continues the introduction-into-beat-switch theme from Foux’s 2019 project Friend or Foux. Though I don’t mind the choice here, it certainly doesn’t feel as essential as it was on this prior record, as the opening to this song isn’t given much time to breathe. Some bars on the track also come off as overplayed and don’t hit quite as hard as expected, like “I put my wrist in the ocean just so you can surf.” Lil Yachty makes a mediocre appearance on this track as well. The disparity between vocals and production on “SWEET!” leaves me ambivalent. With out-of-pocket lyrics throughout the song (“I’m finger fuckin’ a bag”? “I’m finger fuckin’ her back”??), the candied synth melodies play an engaging contrast.

Some of the major problems with the record crop up with the undeveloped “tellyafriends !¡” failing to leave a mark, contrary to the way the three tracks before did. The track captures my attention, but is over before I know it. Similarly, “b€Zerk” gives a reason to pay attention and vibe along at first, but ends after Lancey states “Too swag, I might not even do the next verse.” Though it’s funny on the first play, this closing doesn’t hold up with further listens, eventually reminding me of how curt the song is. These same problems also afflict cuts later in the album with “Wait in Miami,” “chaNGE,” (a far worse attempt at the intimacy of “HONEST,” which appeared on FIRST DEGREE) and “COLLECTION.” “Wait in Miami” brings a clear decline in quality, with the meddling first half of the song leading nowhere. The second half of the track also stagnates instrumentally, with nothing of interest lyrically from Lancey. “COLLECTION” falls victim to the same difficulties. This cut sticks out like a sore thumb, however, as it’s the only track that aims its sights on a pop-rap target. While there’s nothing wrong with Lancey trying something new, this track excels at only one thing: putting me to sleep.

In contrast with the sections of tracks sandwiching it, “I KNOW” syncs up a great vocal performance with even better production. The synth appearing midway through the song hits incredible runs similar to the “c’mon, c’mon” chants in Daft Punk’s “Lose Yourself to Dance”. The hard-hitting “25WAGG3DOU2” catches some of the magic heard in the previous track. The stop-and-go delivery in the second verse is catchy as ever, making for one of the best on the project. Lancey’s love for music-making and rapping comes through clearly here; however, this level of energy and love in the chorus arises nowhere else on the entire record. Producers Jay Trench and Noise of Cory deliver greatness with the kick, bass, and melody line on this song: this one knocks.

Lancey gives a prideful performance on “Over Me !¡,” an ode to his time working with Kanye West on Donda. Even if I were unaware of Lancey’s affiliation with Kanye as of recent, the Donda tang all over this track would come through regardless (evidenced by the epic nature of Kanye West songs in general, but also in Donda cuts like “Jail”). Lancey improves upon the substandard and upsetting second leg of the record with project closer “BIG SWAG.” This doesn’t paint the whole picture, however, as the track is simply a return to mediocrity rather than an enjoyable song. With forgettable production and an uninspired performance from Lancey, the most admirable feature of the track is an appearance from 24kGoldn, who’s excitement and vigor vastly outshines that of Lancey.

Coming into this project, I expected a far greater level of artistry given the precedent that Lancey’s previous projects set. Though I can’t say I came out of this record completely empty-handed, I was underwhelmed by LIVE.EVIL due to the many tracks that sound as though they could use extra concentration. I hope Lancey understands that a creative refocus would work wonders in returning him to at least the same attention to detail evident in his catalog pre-LIVE.EVIL.